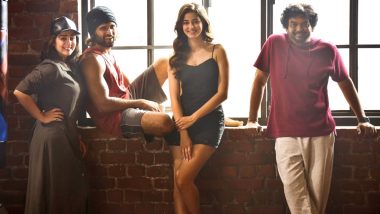 The official announcement has been made! Vijay Deverakonda is making his Bollywood debut with Puri Jagannadh’s film and Ananya Panday will be the lead actress. Ananya has welcomed the Arjun Reddy star to Bollywood with much love and happiness. The makers have not only made such a big announcement but also shared a series of pictures in which you’ll see the film’s lead actors along with the director Puri Jagannadh, who will also be producing the film with Charmme Kaur, Karan Johar and Apoorva Mehta. Vijay Deverakonda’s Co-Star Ananya Panday to Start Shooting for Puri Jagannadh Directorial from This Date.

This yet-to-be titled film is a Pan-India venture. It will be released in Hindi and other south languages as well. The film will be produced under the banner of Dharma Productions and Puri Connects. In the stills shared, we can see Vijay Deverakonda and Ananya Panday dressed in casual, chic attires and reading scripts. In another still, you’ll Vijay and Ananya posing for the camera with Puri Jagannadh and Charmme Kaur. Well, it’s a great news for all fans of Vijay and Ananya. Is Vijay Deverakonda’s Film with Puri Jagannadh Titled Fighter?

Well, Twitterati is going gaga already on how Vijay Deverakonda and Ananya Panday are looking so good together! We wonder what would happen once the makers start releasing the posters, teaser, trailer and songs. The shooting about this untitled film started in mid-January in Mumbai. Vijay has already won hearts with his performance in Telugu films like Arjun Reddy, Geetha Govindam, Dear Comrade, World Famous Lover (his recent release), and many others. Bollywood movie fanatics are just eagerly waiting to watch how this Tollywood hunk going to amaze everyone in Hindi cinema. Stay tuned for further updates!

(The above story first appeared on LatestLY on Feb 20, 2020 11:07 AM IST. For more news and updates on politics, world, sports, entertainment and lifestyle, log on to our website latestly.com).