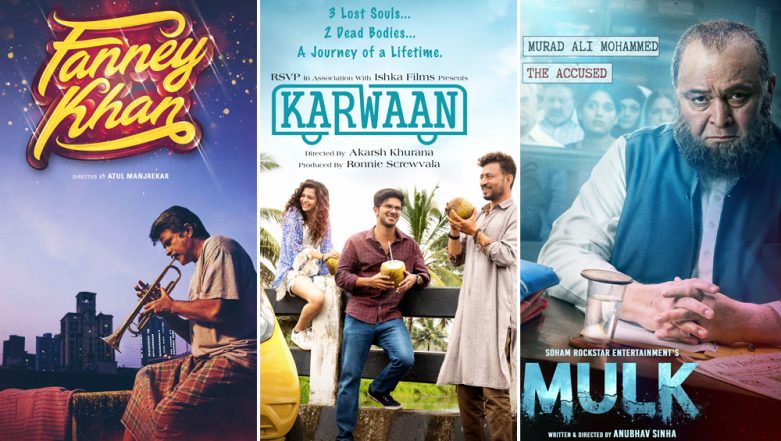 Fannney Khan, Karwaan and Mulk to clash with each other on August 3

On August 3, i.e. this Friday, there are multiple releases that are fighting at the box office, much to the delight of an avid movie lover. What's best is that each movie is interesting and stands apart from its competitor in terms of its starcast, genre and content. August is going to be a month of major clashes, with the biggest being Akshay Kumar's Gold clashing with John Abraham's Satyamev Jayate on August 15. But August 3 clash is not be undermined, for three Bollywood movies are competing with two Hollywood biggies on that day. The winner, of course, will be decided by you!

The three Hindi movies being the musical Fanney Khan, the road trip comedy Karwaan and the courtroom drama, Mulk. The Hollywood movies that will be clashing with these are the action-thriller The Equalizer 2 and the musical, Mama Mia! Here We Go Again, both sequels.

So which of these movies are you rooting for the most? Vote and let us know!

Which Movie are You Most Excited to Watch on August 3? Vote!

In case you are having trouble to choose your pick, here's a little info on the clashing movies of August 3.

Anil Kapoor plays a music-obsessed taxi driver called Fanney Khan, who wants to see his plump daughter make it as a singing star. The movie reunites him with Humara Dil Aapke Paas Hai and Taal co-star Aishwarya Rai Bachchan, though he won't be romancing her this time. Instead, it would be Rajkummar Rao who would take on that duty. Fanney Khan is directed by Atul Manjrekar.

Irrfan Khan might not return to Bollywood any time soon, as he is recovering in London from his tumour (successfully at that). But the last Bollywood movie he shot for is ready for release and it looks promising. Marking the Bollywood debut of Malayalam heartthrob Dulquer Salmaan and YouTube sensation Mithila Palkar, Karwaan is directed by Akarsh Khurana. It is a quirky road trip comedy about three strangers who are brought together by two dead bodies!

Who doesn't love a good courtroom drama with some hard-hitting dialogues? Mulk, directed by Anubhav Sinha, promises to be that, riding high on the current national-anti-national debate, and how radical elements view Muslims as Pakistanis. This is Rishi Kapoor's second film this year after a powerful performance in 102 Not Out. Taapsee Pannu, meanwhile, has already shown her mettle in this genre with 2016's PINK, only this time, she is playing the lawyer, not the accused.

Now the Hollywood players of the week,

The excitement for this decade-long follow-up depends on two factors - whether you have a stomach for Hollywood musicals or whether you have a taste in ABBA's music. The first movie has a huge hit, while the sequel retains most of the original starcast, with new additions in Lilly James, Andy Garcia and Cher. Good news is the reviews have been very positive for the sequel. The bad news is there is very little of Meryl Streep, who has been the biggest draw of the franchise.

So have your chosen your film of the weekend? Share your thoughts in the comments section below,