Ankita in her new interaction with Times Now has strongly denied these reports by saying she wasn't in touch with her ex-boyfriend for the last four years. 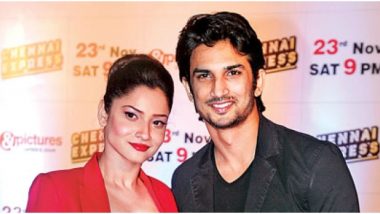 Earlier there were reports about how Ankita Lokhande in her statement to Bihar Police had revealed details of Sushant Singh Rajput's relationship with Rhea Chakraborty. Sources close to the actress had mentioned how Sushant had texted Ankita about his new relationship. The actor was apparently not happy with his actress girlfriend and she was mentally harassing him. However, Ankita in her new interaction with Times Now has strongly denied these reports by saying she wasn't in touch with her ex-boyfriend for the last four years. Sushant Singh Rajput Case: Subramanian Swamy Questions Why Mumbai Police Hasn't Filed Any FIR Yet and Why The Actor's Post-Mortem Report Is Labelled Provisional (View Tweet).

"No, at all. This is a lie. Four years ago, our relationship ended. I didn't have his number nor did I chase him. He wanted to move ahead in his career and he had different priorities. I was happy for him that he was moving ahead in his journey. But we had no contact. Sirf humare beech ek message exchange that wo bhi social media par. This is a lie that I gave anyone a statement that Rhea usse harass karti thi. Nor do I know Rhea nor anything about her. But I know Sushant and I know that there was never a message exchange like this between us," she said when asked if she had, in fact, revealed details of her chat with Sushant. Sushant Singh Rajput Case: Late Actor’s Close Friend Reveals He Is Being Pressured to Speak Against Rhea Chakraborty.

The actress in her interaction also revealed how Sushant wasn't in touch with his family for the past year and they are clueless about why he took such a drastic step. Ankita was extremely close to his family members and she even spoke with them post his demise. The actress has also recorded her statement with the Bihar Police and the investigation into his suicide is still underway.

(The above story first appeared on LatestLY on Jul 31, 2020 04:37 PM IST. For more news and updates on politics, world, sports, entertainment and lifestyle, log on to our website latestly.com).