Pulkit Samrat and Kriti Kharbanda have worked together in two films – Veerey Ki Wedding and Pagalpanti. It has been more than a year since the two are dating each other. 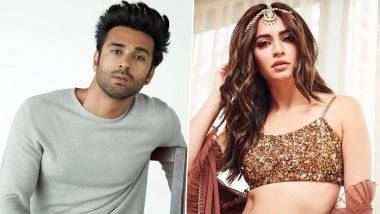 Pulkit Samrat and Kriti Kharbanda have worked together in two films – Veerey Ki Wedding and Pagalpanti. It has been more than a year since the two are dating each other. Their Insta pictures are proof that these two are head over heels in love with each other. Fans of the duo are curious to know when they would be taking their relationship to the next level. In an interview with a leading portal, handsome hunk Pulkit Samrat has spilled the beans about his marriage plans with his ladylove Kriti Kharbanda. Kriti Kharbanda on Her Relationship with Pulkit Samrat: ‘We Are Not Hiding Our Relationship but I Feel People Should Give Us Some Space’.

In an interview with Times Now Digital, Pulkit Samrat was asked whether he and Kriti Kharbanda have plans to get hitched anytime soon. He responded saying as, “No yaar because as of now we want to focus on our careers. Because how many times in life are we going to get a chance to work with Anees Bazmee, Bejoy Nambiar, Salman Khan Films, T-Series, all back-to-back. If God is blessing us and aap par kaam hi kaam aa raha hai, uss kaam pe concentrate karo. That is what we are focusing on.” Taish Teaser: Pulkit Samrat, Kriti Kharbanda, Jim Sarbh's Revenge Drama Looks Gripping (Watch Video).

About being in a relationship with Kriti Kharbanda, the actor stated, “She grounds me, she completes me, and she has brought a lot of khairat in my life. I hope I have done something good and that’s why I have found her.” Meanwhile, Kriti and Pulkit Samrat have reunited once again in the upcoming flick Taish. Stay tuned for further updates!

(The above story first appeared on LatestLY on Oct 25, 2020 09:09 AM IST. For more news and updates on politics, world, sports, entertainment and lifestyle, log on to our website latestly.com).