Baaghi 3 is cruising towards the Rs 100 crore mark and by the second weekend, it might actually achieve it. Baaghi has already been defeated but will it manage to outscore Baaghi 2? 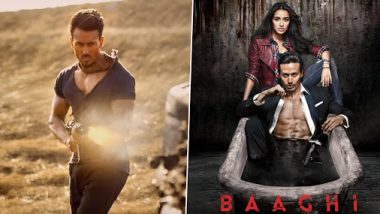 Baaghi 3 is raging on at the box office. In six days, the film has earned Rs 84.97 crore which is a humungous total. Possibly after Tanhaji The Unsung Warrior, Baaghi 3 is the only film that has managed such a big score at the box within days of its release. Now it has managed to leave Baaghi, the first film in the franchise behind. The 2016 film had earned Rs 76.34 crore during its entire run at the box office. But Baaghi will always be special because it came at a time when a Shah Rukh Khan film couldn't set the cash registers ringing. We are talking about Fan here. Rangoli Chandel Lashes Out at Baaghi 3 Director Ahmed Khan on His Comment at Kangana Ranaut’s Manikarnika (Read Tweet)

Now it isn't surprising that Baaghi 3 took only six days to beat Baaghi. The third film in the series has more number of screens. In fact, it has the widest release in the franchise with 4400 screens in India. That has definitely helped the film score extremely well despite terrible reviews.

But what is more surprising here is that despite having such large number screens to its credit, the film has failed close in on Baaghi 2. The latter is still has the highest numbers in the franchise. Many argued it was because of the coronavirus scare, but Baaghi 3 has already proved that the audience is watching it with or without the scare. So will it manage to go anywhere near Baaghi 2 eventually? Seems unlikely.

(The above story first appeared on LatestLY on Mar 12, 2020 11:56 AM IST. For more news and updates on politics, world, sports, entertainment and lifestyle, log on to our website latestly.com).