Baaghi 3: Tiger Shroff Looks Hot and How as He Imitates Keanu Reeves' Action Scene From The Matrix! (Watch Video) 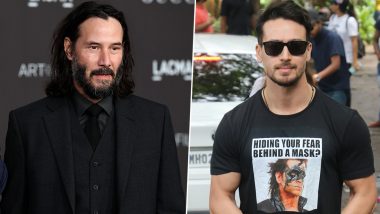 Tiger Shroff fans love it when their fitness icon goes into an all-out action mode. The actor is coming up with his next film namely Baaghi 3. After the super successful instalments Baaghi, Baaghi 2 from the franchise, there are naturally high expectations from him in the third one too. And if we go anything by the latest video he posted on Instagram, he is going to live up to them! The hunk mimicked another hunk that is, Keanu Reeves' action stunt from The Matrix.

The action scene of Keanu's character 'Neo' in this Hollywood flick was appreciated worldwide. Just like all the fans, even Tiger could not resist the fanboy in him and did this action scene on the sets of Baaghi 3 sets. Shroff fans were swooning over his skills and also his chiselled abs in this video! Check it out below and you will believe the hype!

Matrix feels on the sets of #baaghi3

Directed by Ahmed Khan, the flick also sees the reunion of Baaghi actress Shraddha Kapoor with Tiger. It also turns out to be the second Bollywood movie for TV actress Ankita Lokhande after appearing in Manikarnika: The Queen of Jhansi. Coming back to this drool-worthy video, aren't you now excited for Baaghi 3?

(The above story first appeared on LatestLY on Nov 30, 2019 10:52 AM IST. For more news and updates on politics, world, sports, entertainment and lifestyle, log on to our website latestly.com).