On August 28 filmmaker Praveen Morchhale had filed a case against the production company Maddock Films and writer Niren Bhatt in the Bombay High Court. He alleged Bala is similar to the screenplay he had penned down and narrated it to some of the industry members. 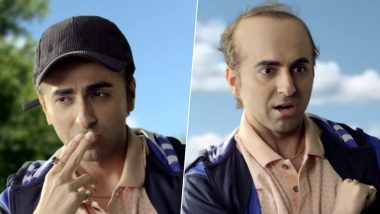 Bala is an upcoming satirical black comedy flick directed by directed by Amar Kaushik. This film produced under the banner of Maddock Films grabbed all the attention ever since the teaser was out, and of course Ayushmann’s quirky avatar. Not only that, fans are eagerly looking forward to the story of a man who is balding prematurely and how he copes with the situation. We did get a glimpse of the storyline in the teaser, but National Award-winning director Praveen Morchhale says this was the same idea even he had conceived in 2005. Bala Teaser: Ayushmann Khurrana's Bald but Bold Avatar Promises an Entertaining Ride.

On August 28 filmmaker Praveen Morchhale had filed a case against the production company Maddock Films and writer Niren Bhatt in the Bombay High Court. He alleged Bala is similar to the screenplay he had penned down and narrated it to some of the industry members. In an interview to Mirror the director was quoted saying as, “I read a news article on Bala being a satirical comedy about premature balding, which was an idea I had conceived in 2005. I worked on it for two years and the registered the story with the Film Writers’ Association in 2007. After compiling information from various sources, I have arrived at the conclusion that Bala is very similar to my story and screenplay.”

Watch The Teaser Of Bala

Praveen Morchhale also admits that he neither met the producer of Bala Dinesh Vijan nor anybody associated to it. But he did narrate it to hundreds of people he met. About it he said, “Since I have registered my concept and script, I can narrate it to as many people as I want, nobody can copy it.” He also stated that his script was called Mr Yogi. He further said, “This case is filed to make a statement that you cannot just take off on somebody’s copyrighted idea or screenplay.”

About this copyright saga Maddock Films told the tabloid, “Maddock is not aware of any case being filed against it by Mr Morchhale and denies that hehas anything to do with its film Bala. Nobody from Maddock has ever met with Mr Morchhale or is even aware of him being associated with a story of a bald man.” Bala is all set to be released on November 22, 2019.

(The above story first appeared on LatestLY on Sep 14, 2019 08:49 AM IST. For more news and updates on politics, world, sports, entertainment and lifestyle, log on to our website latestly.com).