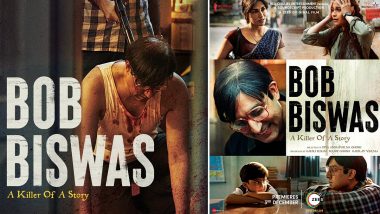 Abhishek Bachchan has taken quite a variety of roles in his career, and has always managed to impress fans with his craft. The actor will now be seen in Bob Biswas, which is a film by Sujoy Ghosh. The film's trailer has already made quite some notice and Abhishek's role as a contract killer is already looking quite intriguing. The makers are leaving no stones unturned to promote the film, and from the posters and videos that have been shared, it looks like the film will be quite gripping. Bob Biswas became the breakout character from the film Kahaani, and the new film will revolve around the same character. Amitabh Bachchan Is a ‘Proud’ Father After Watching Abhishek Bachchan’s Bob Biswas Trailer.

While the character was played by Saswata Chatterjee in Kahaani, filmmaker Sujoy Ghosh recently revealed that he had approached Abhishek Bachchan for the role of menacing contact killer Bob Biswas while making his acclaimed thriller, but the actor couldn't do the film due to scheduling issues. In an interview with PTI, Sujoy said the first draft of the film focused on the characters of Vidya Bagchi and Bob Biswas but later underwent a change as Bachchan couldn't do the film.

The film is a look into the complicated journey of Bob Biswas, a middle-aged hitman-for-hire who comes out of a prolonged coma and does not remember any details about his life and his past, including his wife and children. As he tries to remember his identity, episodes from his past come alive, and the trailer shares a peek into his moral dilemma between embracing his criminal past versus his newly developed sense of right and wrong.

Bob Biswas is set to premiere on December 3, 2021, on ZEE5. Bob Biswas Song Tu Toh Gaya Re: Abhishek Bachchan Is a Puzzled Assassin in This Intriguing Track.

You need a subscription to Zee5 to watch Bob Biswas at any point in time starting December 3.

Bob Biswas reviews are not out yet as there's still time for the film's release. For your convenience, when the reviews will be out, LatestLY will paste it here for you all to read. Stay tuned!

(The above story first appeared on LatestLY on Nov 30, 2021 10:50 PM IST. For more news and updates on politics, world, sports, entertainment and lifestyle, log on to our website latestly.com).