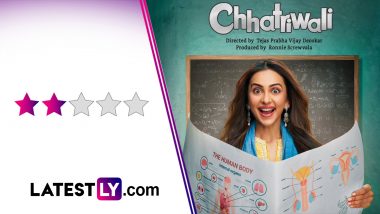 Chhatriwali Movie Review: Before I talk about Chhatriwali, let me talk about Rakul Preet's last Bollywood release before this, Doctor G. And her male co-star in it - Ayushmann Khurrana. No, I am not going to spend this review writing about an actor who has nothing to do with Chhatriwali, but rather I want to point out his breakout film - Vicky Donor. And the reason why I am speaking about Vicky Donor in a review about Chhatriwali is because the former gives quite the plot template to the latter, and what's more, Chhatriwali even borrows the actor who plays Ayushmann's mother in the Shoojit Sircar film - Dolly Ahluwalia. Rakul Preet Singh Talks About Her Experience With ‘Sex Education’ in School, the Chhatriwali Actor Says, ‘We Use To Giggle and Shy Away From That’.

Chhatriwali, directed by Tejas Prabha Vijay Deoskar, revolves around Sanya (Rakul Preet), a chemistry graduate in Karnal who gives tuitions for the subject but is actively looking for employment. Ratan Lamba (Satish Kaushik), an owner of a condom manufacturing company, is desperately looking for a condom tester. When he meets Sanya and is impressed by her chemistry knowledge, he offers him the vacant position.

At first hesitant, Sanya decides to take up the job to meet her expenses, but she keeps her job secret from her family. That secret follows her to her in-laws, after she marries the good-hearted Rishi (Sumeet Vyas), a stationery shop owner, whose stubborn elder brother Rajan (Rajesh Tailang) is a school-teacher for biology. Though she wasn't a fan of her own job, her married life and her interactions with her in-laws make Sanya realise the importance of condoms in a healthy sexual life.

Even though the movie had made it clear that Rakul Preet is playing a condom tester, the trailer for Chhatriwali strangely underplays this aspect and instead focuses on educating kids (and adults) about sex. Now that I have seen the film, I get why. Chhatriwali tries to tackle three 'unconventional' (for a mainstream family film) themes in a single movie. It talks about condom testers as a profession, while exploring how a female would fit in such a role under the male gaze. Then it is about safe sex practice and importance of condoms for a healthy married life. Finally, as the trailer tells, it delves into sex education and the importance of the subject in school curriculum.

The problem with Chhatriwali, despite its very noble intentions, is that it doesn't do much justice to its triple plot. Firstly, there is the familiarity of the storyline that it borrows from Vicky Donor - protagonist coerced into a societally forbidden job by an over-enthusiastic uncle, keeping the job a secret even from the spouse, the spouse feels betrayed but in the end, everyone realise the importance of the protagonist's work. Chhatriwali feels like the cousin of the other movie, the kind who we nod at any function but is largely ignored for not standing out on its merits. OTT Releases Of The Week: Lior Raz's Fauda Season 4 on Netflix, Sidharth Malhotra's Mission Majnu on Netflix, Rakul Preet Singh's Chhatriwali on ZEE5 & More.

Yes, Rakul Preet is very likeable in the lead role. Yes, the underrated Sumeet Vyas offers her good support, along with Satish Kaushik. Yet, none of the characters manages to leave an indelible and lasting impression on you.

Secondly, Chhatriwali reiterates hard the importance of open talks about sex and the importance of sex education in school. Good aspirations, indeed, yet the movie turns the proceedings into a farce later on, especially after Sanya tries to motivate other women in her town to insist on protection and then realising the root of all the problems is the lack of sex education, turns unofficial 'sex educator' for the school where her brother-in-law is teaching. In these proceedings, the most fascinating aspect of the movie - of Sanya being a condom tester - is conveniently sidelined. It is hard to take a movie serious, when it has no intentions to take itself serious.

Chhatriwali may talk about protection in sex, but it needed protection for itself from underwritten screenplay, driven by its weak characters and stereotypes. Chhatriwali is streaming on Zee5.

(The above story first appeared on LatestLY on Jan 20, 2023 08:40 AM IST. For more news and updates on politics, world, sports, entertainment and lifestyle, log on to our website latestly.com).