Deepika Padukone Birthday Special: From Gehraiyaan to Pathan, Every Upcoming Movie of the Bollywood Actress

Deepika Padukone is one of the highest-paid actresses in India and today on her birthday, let's take a look at every upcoming movie of the Piku actress. 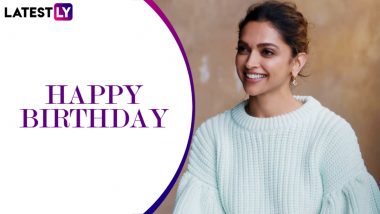 Deepika Padukone turns 36 today and the stunning Bollywood diva has interesting movies under her kitty beginning from Shakun Batra's Gehraiyaan starring Ananya Panday and Siddhant Chaturvedi to Hrithik Roshan's action flick Fighter. The actress was last seen in recent release 83 next to hubby Ranveer Singh in which she played the role of his love interest. Deepika Padukone made a mark in the industry with her Bollywood debut next to Shah Rukh Khan in the 2007 film Om Shanti Om that became a big Box-Office success. Deepika Padukone Shares an Year End Photo Dump of All the Things She Loves (View Pics).

In her career, the actress gave many hits like Housefull, Race 2, Yeh Jawaani Hai Deewani, Chennai Express, Goliyon ki Raasleela Ram-Leela, Piku, Bajirao Mastani, and Padmavat. Deepika Padukone is one of the highest-paid actresses in India and today on her birthday, let's take a look at every upcoming movie of the Piku actress. Ranveer Singh and Deepika Padukone Head for a Vacation to Celebrate the New Year (Watch Video).

Anne Hathaway and Robert De Niro's Hollywood hit The Intern is getting a Hindi remake and Deepika Padukone is roped in to play the female lead. The film was initially announced with Deepika and late actor Rishi Kapoor in the lead and after the actor's demise, Amitabh Bachchan was locked in to play De Niro's role.

Deepika Padukone will be next seen in Shakun Batra’s Gehraiyaan. Apart from Deepika, the film also stars Siddhant Chaturvedi, Ananya Panday, and Dhairya Karwa in lead roles, while Naseeruddin Shah and Rajat Kapoor will be seen in supporting roles. The film is to premiere on Amazon Prime Video on January 25.

Deepika is roped in for Siddharth Anand's Fighter and the actress is paired opposite to Hrithik Roshan in this actioner. The film is touted to be India’s first aerial action franchise, revolving around the Indian armed forces. The film was officially announced on Hrithik's Birthday last year.

The 36-year old shared some Instagram stories from the first shoot schedule of Nag Ashwin's Project K. This is going to be Deepika's first-ever collaboration with Bahubali fame actor Prabhas. It also stats megastar Amitabh Bachchan in major role.

Deepika as Draupadi in Madhu Mantena's Next

Deepika Padukone is all set to play the protagonist Draupadi in a film that is currently being scripted and will be a mythological drama based on Mahabharat. Deepika is collaborating with filmmaker Madhu Mantena for this big-budget film, which could be made in two or more parts.

LatestLY and team wish the Bollywood Diva a Happy Birthday! Keep entertaining us through your films in years to come.

(The above story first appeared on LatestLY on Jan 05, 2022 08:42 AM IST. For more news and updates on politics, world, sports, entertainment and lifestyle, log on to our website latestly.com).