Deepika Padukone Keen to Be an Indian Avenger, Says It Would Be Very Interesting

During the unveiling of Deepika’s wax statue at Madame Tussaud’s yesterday, the actor expressed that she would be love to be a part of Avengers. 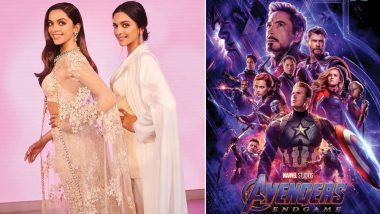 Avengers superheroes have been ruling the internet ever since the new trailer of the most-anticipated Hollywood film of the year, Avengers: Endgame was dropped yesterday. The fans and movie buffs are jumping with joy with what MCU has in store for them. However, there is a bigger surprise for the Indian audience as the Bollywood Diva and one of the most talented actors, Deepika Padukone has hinted an interest to be a part of the Avengers. Ranveer Singh Smitten by Deepika Padukone's Wax Statue at Madame Tussauds Is the Best Thing on Internet Today.

During the unveiling of Deepika’s wax statue at Madame Tussaud’s yesterday, the actor expressed that she would be love to be a part of the movie and it would be very “interesting” to tackle the role.

Deepika said, “Yeah, of course. Why not?” “I mean I’d say Indian origin. So whatever it’s Marvel or whether it’s Avengers, or you know, any of these iconic characters that we’ve seen in cinema, I think it would be very interesting,” she further added.

"And I think the world is ready for it to see one of these superheroes, one that originates from India. "I believe it will happen soon. I know it will," Deepika said. Deepika Padukone's Traditional Look From Akash Ambani-Shloka Mehta’s Wedding Inspires Acid Attack Survivor Laxmi Agarwal, Shares Beautiful Collage on Instagram.

However, we may be able to see the beloved star in the superhero costume, as she is busy with her upcoming movie Chhapaak. Chhapaak is based on a real-life story of acid attack survivor Laxmi Agarwal. The movie has been penned by Meghna Gulzar and Atika Chohan. Meghna's filmography already includes two great films, namely Raazi and Talvar so fans have quite high expectations from this one too.

Here are some pictures from yesterday's event:

The Padmaavat star had put up a LIVE video on her Instagram story during the event and the Simmba actor looked all smitten in it. Deepika can be caught saying to Ranveer, “If you miss me while shooting 83, you can come here.” Replying to this, perfect hubby said, “I can take her home with me. I have legitimate authority over this figure even more that Deepika as I know her better.”

(The above story first appeared on LatestLY on Mar 15, 2019 04:10 PM IST. For more news and updates on politics, world, sports, entertainment and lifestyle, log on to our website latestly.com).