Dharmendra Birthday: Five Cameos By The Legendary Actor We Just Love To Watch

Dharmendra has a magnanimous personality who can light up the screen the moment he makes an entry. Even if the screentime is less, the actor manages to warm your heart. Hence we decided talk about these short appearances in movies that left us more in awe of the He-man of Bollywood. 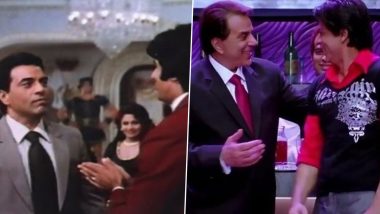 Dharmendra is a megastar. Yes, even today he is a megastar. These days, while he has reduced his acting assignments, he enjoys conversing with his fans on Twitter while also giving updates about his garden spoils. There's a certain likeability in this man. While he is termed as the 'Garam Dharam', you will often find him making 'naram' conversations with people. That's why one should always know how to separate reel from real. But since it's Dharmendra's birthday, we can't not talk about his screen presence. He has a magnanimous personality who can light up the screen. Even if the screentime is less, Dharmendra manages to warm your heart. Hence we decided talk about these short appearances in movies that left us more in awe of the He-man of Bollywood. On Sylvester Stallone's Birthday, This Throwback Video of Dharmendra Aping Rocky's Iconic Workout Montage is Going Viral! (Watch Video)

Mehmood's this movie is a tear-jerker which found a lot of encouragement and support from the actor's friends in the fraternity. Dharmendra appeared with Hema Malini and played a couple courting in this scene.

Dharmendra and Hema Malini appear together again in a cameo song for this slice-of-life Basu Chatterjee movie. Did You Know Birthday Duo Dharmendra and Sharmila Tagore Were Part of Gulzar's Devdas? View Unseen Stills from Shelved Film!

Dharmendra played a superstar in the film who encourages Murari (Asrani) to move ahead.

Yet again he played a superstar in an Amitabh Bachchan film. This is a very popular song from the movie and Dharmendra looks so fine!

When talking about popular cameos of Dharmendra, who can forget Om Shanti Om?

There are a few more of them but this what we remember and cherish of Dharmendra's cameos.

(The above story first appeared on LatestLY on Dec 08, 2021 08:10 AM IST. For more news and updates on politics, world, sports, entertainment and lifestyle, log on to our website latestly.com).