Did Alia Bhatt Miss Out on Ashwiny Iyer Tiwari's Next Project Because her Super Packed Schedule Kept the Director Waiting?

Apparently, Alia Bhatt was already committed to doing the project with Ashwiny Iyer Tiwari. However, the director was tired of waiting for her to give the dates. 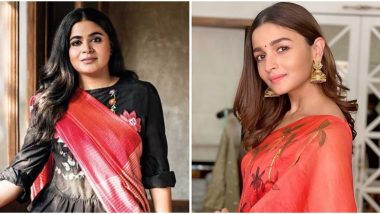 Alia Bhatt is a name that's probably on every director's wishlist at the moment. She's clearly the most sought-after actress in the industry currently and her acting proficiency cannot be even. After delivering some smashing performances in Highway, Udta Punjab and Raazi. there's no reason why any director or even a producer would hesitate to offer her a script and pray for her to give the nod. As this was precisely what Ashwiny Iyer Tiwari had in her mind before she got tired of waiting. Kangana Ranaut-Jassi Gill Starrer Panga Team Celebrate Schedule Wrap Up! (View Pic).

As per a report in Rajeev Masand's Open Magazine column, the Bareilly ki Barfi director was working on two scripts before Panga got finalised and went on the floors. The other project in question here was an official remake of a foreign movie and Alia Bhatt was committed to playing a deaf-mute protagonist in it. However, since the actress got busy with Brahmastra's never-ending shoot and later with Sanjay Leela Bhansali's Gangubali Kathiawadi, Mahesh Bhatt's Sadak 2 and SS Rajamouli's RRR, the director had no other option but to shelve the project temporarily. She was apparently tired of waiting for Alia and has no plans about pursuing the project with her. This is clearly Alia's loss and they say, 'someone's loss is someone's gain'. Murthy: Ashwiny Iyer Tiwari to Helm Biopic on Infosys Co-Founder NR Narayana Murthy and Wife Sudha Murthy.

Meanwhile, the next project that Tiwary had in her mind was Panga that's already wrapped with Kangana Ranaut in lead. The actress was quick to give her the dates post-Manikarnika's release and the movie is already slated for January 2020 release.

(The above story first appeared on LatestLY on Dec 14, 2019 04:15 PM IST. For more news and updates on politics, world, sports, entertainment and lifestyle, log on to our website latestly.com).