Emraan Hashmi Birthday: 5 Liplocks of The Body Star That Are Super Passionate and Steamy (Watch Videos)

Emraan Hashmi earned the tag of serial kisser in the initial stage of his career. And as the Jannat actor turns a year older today, what a better day to laud his art of kissing. Literally, he is the baap of kissers from B-town and here's proof. 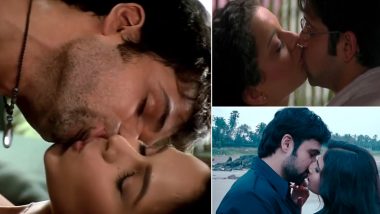 Emraan Hashmi is not just a regular movie star. The actor who made his B-Town debut with Footpath in 2003 created a niche for himself and also showed it to the world ‘how bold scenes are performed’ on the celluloid. Tagged as the serial kisser of the industry, Hashmi is still recognised by the same name. Well, before Ranveer Singh and Vaani Kapoor’s 23 steamy kisses in Bifikre, it was Hashmi who introduced passionate kisses in Hindi cinema. Right from the initial stage of his career, it was the star’s liplocks from his films which made him famous. Be it, Mallika Sherawat, to Vidya Balan, Emraan has been lucky to smooch numerous girls from Bollywood. Bard of Blood: Emraan Hashmi's New Look from Shah Rukh Khan's Spy Thriller is Out, Trailer to Release Today.

And as the Jannat actor turns a year older today, what a better day to laud his art of kissing. Literally, he is the baap of kissers from B-town. So, without further ado, let’s get started. Malang: Aditya Roy Kapur's Response To Being Called Emraan Hashmi's Competitor In Kissing Scenes Leaves Disha Patani Giggling (Watch Video).

Next up, we have Hashmi in specs kissing Kangana Ranaut. This scene is from their film Gangster where both the stars can be seen passionately indulging in a kiss.

What happens when two good looking souls not only get a little intimate but are seen madly kissing each other? Well, we guess the result is fire-y. Yup, that’s what Jacqueline Fernandez and Emraan’s kiss will make you feel within you. Watch!

This kiss might look uncomfortable but it’s not. Hashmi and Kriti Kharbanda here showcase emotions to the next level and at a point, you will surely lose your control. See for yourself.

Last but not the least, it’s one of the most smooth kisses featuring Emraan and Vidya Balan. Yes, there ‘Ishq surely looks Sufiyana' here. Watch!

Earlier, in one of his old interviews with HT, the actor had added on how he has benefitted from the serial kisser tag. He said, "A number of my films in which I was shown kissing did very well in the beginning of my career. So that tag naturally became a part of me. People like to label and box things up, and you just can’t hold that against them. And frankly, this was not something I was running away from. I will be honest. I have benefited a lot from it." Happy Birthday, Emraan Hashmi, stay blessed!

(The above story first appeared on LatestLY on Mar 24, 2020 09:05 AM IST. For more news and updates on politics, world, sports, entertainment and lifestyle, log on to our website latestly.com).