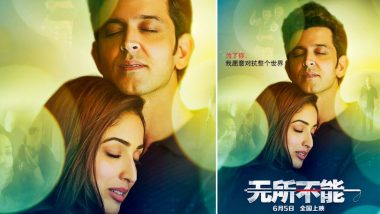 Sanjay Gupta’s film Kaabil starring Hrithik Roshan and Yami Gautam released on January 25, 2017 in India. The story revolved around the life of Rohan Bhatnagar (Hrithik) and Supriya Sharma (Yami), who were visually impaired. It was a love and revenge saga that struck a chord with the audience. The film is now all set to release in China on June 5. And Kaabil also happens to be Hrithik’s first film to make it ways to the theatres there. More Action for Hrithik Roshan! Actor to Sign an Actioner with Sajid Nadiadwala Ahead of His Film with Tiger Shroff.

Before Kaabil there have been many other Hindi films that released in China. It includes PK, Dangal, Bajrangi Bhaijaan and many other films have been screened in China and earned astounding figures at the box office. Bollywood films have a huge demand in China and we’ll have to wait and watch how this action-thriller manages works with the audience there. Kaabil opened in 2700 screens but on seeing great response from the cinephiles, the movie was released in 200 more screens in India on February 2, 2017. Hrithik Roshan’s Super 30: All the Controversies That Have Happened around the Movie So Far.

Talking about the film’s release in China and about his character in it, Hrithik Roshan said in a statement, “Kaabil is extremely close to my heart and it is overwhelming to see it reach even more people now, with the impending release in China. I gave every bit of myself to this specially-abled character. The process of getting into the shoes of the character while fighting a created tragic situation was a powerful and agonizing feeling at the same time.” The film also stars Ronit Roy and Rohit Roy in key roles. Meanwhile, Hrithik is also working on Super 30 and another untitled project helmed by Siddharth Anand.

(The above story first appeared on LatestLY on May 14, 2019 02:00 PM IST. For more news and updates on politics, world, sports, entertainment and lifestyle, log on to our website latestly.com).