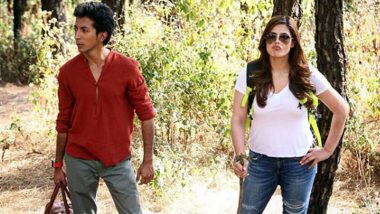 Hum Bhi Akele, Tum Bhi Akele, starring Anshuman Jha and Zareen Khan, has been chosen as the closing night film of 11th Kashish Mumbai International Queer Festival. It will be virtually streamed on July 30. The film helmed by Harish Vyas has Anshuman playing gay characters named Veer while Zareen essays a lesbian, Mansi. The story revolves around the friendship they forge on a road trip from Delhi to McLeod Ganj. Kashish 2020: 11th Edition of LGBTQIA+ Film Festival to Have a Virtual Screening of 157 Films from 42 Countries

"It's an honour for Harish and me that a story we so steadfastly believe in, is winning love and finding a new audience. We are excitedly looking forward to showing the film to a whole new set of people and awaiting their feedback on our little passion project," said Anshuman. MTV Roadies Xtreme Winner Kashish Thakur Pundir is Aiming for a Bollywood Debut

"After Winning 'Best Film' at SAIFF (South Asian International Film Festival) at its World Premiere in New York, I am elated that 'Hum Bhi Akele...' is the closing film at Kashish, Asia's biggest LGBTQ+ festival. The fact that the jury felt it worthy of the closing film honour from 150-plus films is what makes us happy," he added.

(The above story first appeared on LatestLY on Jul 30, 2020 04:26 PM IST. For more news and updates on politics, world, sports, entertainment and lifestyle, log on to our website latestly.com).