Helmed by Jai Basantu Singh, Janhit Mein Jaari stars Nushrratt Bharuccha in lead role. The movie was released in theatres on June 10. Check out what critics have to say on social-comedy drama. 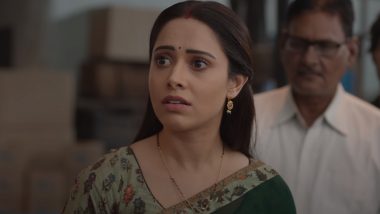 Nushrratt Bharuccha-starer Janhit Mein Jaari was released in big screens on June 10. The film is produced by Vinod Bhanushali, Kamlesh Bhanushali, Vishal Gurnani, Raaj Shaandilyaa, Vimal Lahoti and Shradha Chandavarkar. The flick has garnered mixed reactions from the critics as per the story line. The movie sees Nushrratt as a condom salesgirl. Janhit Mein Jaari: Nushrratt Bharuccha Hits Back at Trolls Over Condom Salesgirl Role on Her Upcoming Movie (Watch Video).

The synopsis of the social-comedy film reads, "A young girl (Nushratt Bharuccha), a crusader who takes up the challenging job of selling condoms in a small town in MP, India. The film examines the difficulties she faces amidst the social taboo, and how she handles the resistance from her family, and the entire town." Janhit Mein Jaari Trailer: Nushrratt Bharuccha as Condom Salesgirl Tries to Break Taboos in This Social-Comedy (Watch Video).

Check out some of the reviews by critics below:

The Indian Express: "What makes this film, at least its first half, such good fun is the writing. It’s light and funny, and the characters do their job well, as we see the Bollywood small town (clearly, Chanderi in MP is the new ‘It’ town) in throes of a ‘sasur-bahu’ saga. Manokamna’s parents’ home is dubbed Condom Niwas, the father-in-law goes blue in the face when he discovers the true nature of his ‘kamaau bahu’s (earning daughter-in-law) job, the husband is more a dutiful son than a supportive husband, and barbs fly thick and fast."

NDTV: "The makers of Janhit Mein Jaari are driven by the belief that they are doing women's empowerment a world of good - to a certain extent, they aren't wrong at all - but by straying into terrains that only serve to take the focus away from the important central premise, the film irretrievably undermines itself and the thrust of its message."

Bollywood Hungama: "Raaj Shaandilyaa's story has a nice message. However, it gives a déjà vu of his own film DREAM GIRL [2019] as it’s also about a protagonist who takes up a job he/she is not proud of initially and hides the fact from his/her family member(s). It is also a bit similar to HELMET [2021], which was also a comedy based on condom sales and its importance. Jai Basantu Singh, Raaj Shaandilyaa, Rajan Agarwal and Sonali Singh's screenplay fails to entice. There are far too many tracks and there are places where the principal track takes a backseat. Even the main track of a woman working in the condom industry is not fleshed out well. Raaj Shaandilyaa's dialogues are quite funny and try to uplift certain scenes. Sadly, the script is not upto the mark and hence, even some of the dialogues don’t have the desired impact."

Cinestaan: "While Janhit Mein Jaari’s first half comes across as a typical comedy dealing with human emotions set in a small town, in the second half it morphs into a preachy social drama. One only wishes the messaging was more subtle. For instance, at one point, the viewer is suddenly bombarded with data about abortion and its risks." Janhit Mein Jaari: Nushrratt Bharuccha and Team Visit Delhi’s Bangla Sahib Gurudwara Ahead of the Film’s Release.

IWM Buzz: "This film and its radical statement on why women need to make sure that their partners use condoms, belongs to Nushrratt Bharuccha. She is fiery , feisty and blissfully plastered when her in-laws are not watching. The character owes an allegiance to Kangana Ranaut’s Tanu in Aanand Rai’s films. But then all smalltown female firebrands are like that only."

So, after reading the above reviews are you planning to watch Janhit Mein Jaari in theatres near you? Tell us in the comment section below.

(The above story first appeared on LatestLY on Jun 10, 2022 03:02 PM IST. For more news and updates on politics, world, sports, entertainment and lifestyle, log on to our website latestly.com).