Speaking of Katy's concert, she will perform at OnePlus Music Festival at DY Patil Stadium on November 16. She will also be accompanied by other Indian music composers including Dear Zindagi composer Amit Trivedi. 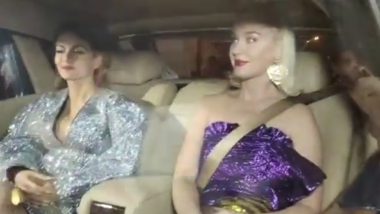 The desi fans of Katy Perry are super excited about her arrival in Mumbai, India. The international singing sensation arrived in the maximum city for her concert.  Of course, as per the tradition of Bollywood, every popular International celebrity has to get a grand welcome by the biggies of town. We saw the extravagance in the past few years at different starry residences. This time, the host for Katy is Karan Johar. 5 Katy Perry Songs That Would Drive Her Fans Crazy If She Performs Them Live at OnePlus Music Festival 2019 in Mumbai (Watch Videos).

The "Roar" singer just arrived in style accompanied by her friend at KJO's bash. As you can see in the video posted by us, the performer is all decked up for this Bollywood bash. She is seen wearing a blingy purple dress. The fans and the media persons thronged her car for the pictures and videos. She was visibly amused at the sight! Check out the video below.

Karan's party is reportedly going to be attended by various stars of B-town. Kajol, Alia Bhatt, Malaika Arora etc are a few of the names which are said to be present here. However, the confirmed guest list will only be known after we get hands on the inside pictures of this starry bash.

Speaking of Katy's concert, she will perform at OnePlus Music Festival at DY Patil Stadium on November 16. She will also be accompanied by other Indian music composers including Dear Zindagi composer Amit Trivedi. It will indeed be fun to watch her performance and the fans' responses to them. Stay tuned with us while we bring to you the updates from all of that!

(The above story first appeared on LatestLY on Nov 14, 2019 11:37 PM IST. For more news and updates on politics, world, sports, entertainment and lifestyle, log on to our website latestly.com).