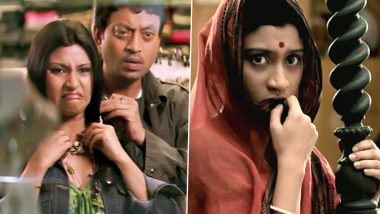 Every time we talk about Konkana Sen Sharma, we generally discuss her roles in movies like Page 3, Traffic Signal, Mr and Mrs. Iyer and a Bengali film called Dosar. But one crucial thing that we forget here is that Konkana is not a limited actress. Her talent is not bound by genre. She is perfectly capable of doing a noir film, switching to a romantic story, transforming into a girl next door with dreams, or leaving everyone stunned by her talent in intense movies. This also includes her reputation as someone with great comic timing. Kuttey: Arjun Kapoor, Tabu, Naseeruddin Shah, Konkana Sen Sharma To Star in an Aasmaan V Bhardwaj Film.

Surprised, right? Not many associate Konkana Sen Sharma with comedy films but she has been part of several, flaunting her comic flare. Just so that you also appreciate what we have discovered long back, here're five times she wowed us with her funnier side.

Life In A Metro

Sometimes you don't have to be the one belting the one-liners to make a scene funny. Irrfan Khan here does the job quite well but it wouldn't have made as much impact if there was no Konkana reacting to his jibes.

The President Is Coming

Not many have watched this but Konkana walked away with all the laughs and laurels in this film.

This Aprna Sen directed Bengali film has Konkana playing shy and meek yet naughty grand daughter-in-law who is haunted by her great grand mother-in-law. She was just superb in it.

We agree Konkana wasn't really funny here but the sass she projected was simply fantastic. Her comebacks were classic here. Konkana Sen Sharma Birthday: Five Bengali Movies Of The Brilliant Actor You Must Watch.

At times, you don't need to be overtly funny to make an impact. Konkana can state the obvious and it becomes funny.

(The above story first appeared on LatestLY on Dec 03, 2022 08:10 AM IST. For more news and updates on politics, world, sports, entertainment and lifestyle, log on to our website latestly.com).