The best thing about Konkana Sen Sharma's acting flair is she has a very gentle and delicate way of approaching her roles which makes them all special. However, if you want to understand the true extent of her talent, do yourself a favour and watch these five Bengali movies of her. 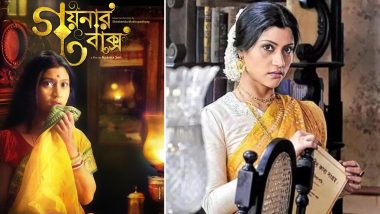 Konkana Sen Sharma is one of those actresses who can light up every movie with her brilliance. Be it her silent realisation about the truth of journalism in Page 3 or the struggles of an aspiring actress in Luck By Chance, Konkana has seamlessly blended with the characters and made them all an extension of her personality. The best thing about her is she has a very gentle and delicate way of approaching her roles which makes them all special. However, if you want to understand the true extent of her talent, do yourself a favour and watch these five Bengali movies of Konkana Sen Sharma. Konkana Sen Sharma Birthday Special: Five Movies Of The Actress That Prove What A Versatile Performer She is

The story is of a girl's journey to adulthood as she meets her crush, a Bollywood superstar played by Mithun Chakraborty. Konkana handled the character extremely well as it needed her to be a teenager blushing and feeling shy in front of a superstar without going overboard. You can watch it on YouTube.

Konkana plays a loyal wife who one day gets to know about her husband's infidelity when he gets into an accident. The other woman was in the car too. The actress navigates the complicated role of a wife in dilemma supremely well. The anger she feels when she learns the truth is simply fascinating. You feel angry with her and that is possibly the best way an actress can connect with the audience. You can watch it on Amazon Prime. The Rapist: Konkona Sen Sharma, Arjun Rampal’s Film From Aparna Sen to Have Its World Premiere at 26th Busan International Film Festival

Konkana played the younger self of her mother Aparna Sen in the movie. The story is about an actress who wants to end her life after life leaves her high and dry. Konkana as the playful and lively actress in the film does a superb job of showing the emotions of a person who has success but is denied love. You can watch it on Amazon Prime.

A ghost comedy Goynar Baksho has Konkana playing a newly wed who is traumatised by the spirit of her dead mother-in-law. The actress' comic timing is just perfect here! Watch it on Amazon Prime.

The movie talks about the relationship between Rabindranath Tagore and his sister-in-law Kadambari. Konkana handles the complicated role really well. Check it out on Amazon Prime.

(The above story first appeared on LatestLY on Dec 03, 2021 08:20 AM IST. For more news and updates on politics, world, sports, entertainment and lifestyle, log on to our website latestly.com).