Check out these fresh pics from Nick and Priyanka's haldi ceremony 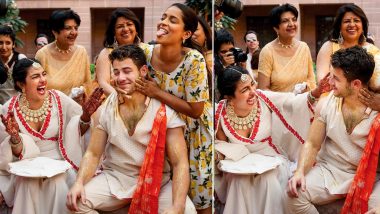 Bollywood actress Priyanka Chopra tied the knot with Nick Jonas in a beautiful ceremony in India in December. It has been over two months since our Desi Girl got married and pictures from her wedding with Nick continue to flood the internet till today. Yes, we are about to share with you some more unseen pics of Nickyanka that have surfaced online, thanks to PeeCee's BFF - Lilly Singh, aka Superwoman. Taking to Instagram, she shared some lovely photos where she's seen applying Haldi to the groom and he seems to be having a whale of a time enjoying the tradition. Priyanka, who is sitting right next to him, is loving each and every bit of it! After Wife Priyanka Chopra, Nick Jonas Shares a Throwback Pic of His Wax Figure at Madame Tussauds, New York.

"How to turn a Jonas brother into a Simpson. If I’m gonna do it, I’m gonna do it right! My sis @priyankachopra told me no mercy during the haldi (turmeric) ceremony on @nickjonas. Ya girl had to deliver," she captioned the pics on Instagram. Lilly was among those few people who made it to the guest list, Priyanka and Nick both kept their wedding an extremely intimate affair with minimal people coming in. They three a few lavish reception bashes post that which had the who's who of Bollywood and Hollywood covered. Priyanka Chopra's Take on Adding 'Jonas' to Her Name Will Give You a Fresh Perspective of Looking at Marriages.

How to turn a Jonas brother into a Simpson. 😂 If I’m gonna do it, I’m gonna do it right! My sis @priyankachopra told me no mercy during the haldi (turmeric) ceremony on @nickjonas. Ya girl had to deliver 💁🏽‍♀️

Priyanka changed her Instagram handle to Priyanka Chopra Jonas after getting married to the singer in December. That made a lot of people question her take on feminism et all! She opened up about her decision recently when she appeared on "The Tonight Show Starring Jimmy Fallon" to promote her Hollywood movie Isn't It Romantic. "I always wanted to add his name to mine because I feel, like, you know, we are becoming family. And I'm a little traditional and old school like that," Priyanka is seen saying in an episode's clip. Another important point she made here is that she feels it doesn't "take away my identity. He gets added to who I am". Now that's another way of looking at it and we hope all questions have been answered. Meanwhile, coming back to these amazing pics, how awesome are they?! Comment below and do tell us.

(The above story first appeared on LatestLY on Feb 10, 2019 12:54 PM IST. For more news and updates on politics, world, sports, entertainment and lifestyle, log on to our website latestly.com).