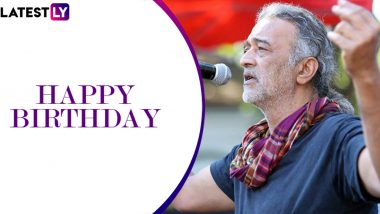 Lucky Ali is one of the most loved singers of the industry. Known for his distinctive music style and also for his untrained voice, this singer-songwriter-composer has won hearts over the years with his wonderful melodies. The 90s kids especially would not be able to get over the kind of music and meaningful songs given by him. Even today the songs sung by Lucky Ali remains our favourite and they’ll always be. Lucky Ali Takes a Dig at Music Artists of This Generation; ‘Feeling Happy about the Online Clicks Makes You a Loser’.

The songs sung by Lucky Ali can never get off from our playlists. The songs not only are soothing to listen to, but even eye-pleasing. Most of his songs have been shot at exotic locations and it was indeed a visual treat. Lucky Ali, who had made his debut with the album “Sunoh”, it made him popular and not just that, he even got be known as one of the best pop vocalists. On the occasion of Lucky Ali’s 62nd birthday, let’s go through some of his classics that music lovers love even today.

The song “O Sanam” is from the album “Sunoh” that shot him to fame. The lyrics of this track were penned by Lucky Ali’s childhood pal Syed Aslam Noor. This number was shot in Cairo, Egypt, and his first wife Meaghan Jane McCleary had acted in this video.

The soundtrack from movie Sur – The Melody of Life was a rage and one of the songs titled “Aa Bhi Jaa” was a chartbuster. This song was crooned by Lucky Ali (who had also played the lead role) and Sunidhi Chauhan.

Even this is another feel-good number crooned by Lucky Ali and also one of the most celebrated songs as well. The meaningful lyrics of this track and the wonderfully shot video made this number a winner.

This is from the studio album of the same name and it features numerous artists in which Lucky Ali had featured in three out of eight songs. This soulful love ballad was also huge hit.

This was one of the most loved tracks of Hrithik Roshan and Ameesha Patel starrer Kaho Naa Pyaar Hai. All the songs from this romantic drama were a hit.  “Na Tum Jaano Na Hum”, a slow track but beautifully composed and picturised that one just cannot ever forget.

These are some of the classics given by Lucky Ali and there are many more. Here’s wishing the super talented singer a very happy birthday!

(The above story first appeared on LatestLY on Sep 19, 2020 09:05 AM IST. For more news and updates on politics, world, sports, entertainment and lifestyle, log on to our website latestly.com).