Makers of Abhishek Bachchan’s The Big Bull Shift Its Release to 2021? Is Scam 1992’s Massive Success the Reason Behind It?

Rumours have been surfacing online that the release of The Big Bull starring Abhishek Bachchan was shifted to next year due to the massive success of Mehta's show. 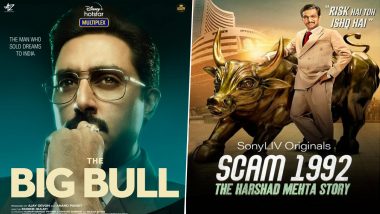 Hansal Mehta's Scam 1992 starring Partik Gandhi became one of the most popular show during the lockdown. The gripping story received a lot of appreciation from the viewers and critics and Pratik became a star overnight. The show that did not have much of a pre-release buzz picked up the pace quite rapidly and became the talk of the town. Everyone was talking about the show and thanks to Scam 1992's theme song, we all were vibing on the show's energy. Scam 1992 Is IMDb’s Highest-Rated Indian Web Show of 2020; Jitendra Kumar’s Panchayat, Kay Kay Menon’s Special OPS in Top 3.

But while this was a reason for celebration for Team Scam 1992, the makers of The Big Bull saw it as a threat. The story of The Big Bull is on the same lines as Scam 1992. Rumours have been surfacing online that the release of The Big Bull starring Abhishek Bachchan was shifted to next year due to the massive success of Mehta's show. The film which was slated to release on December 18, 2020 will now reach its audience in 2021. Bollywood Hungama reports that the producers of the film had no idea that Scam 1992 would become such a massive show.

A source close to the development told Bollywood Hungama, "The producers of the film knew about the web series but never thought it in their wildest dreams that Scam 1992 would become the most appreciated show in the history of Indian digital space. They are confident about their film but fear that it’ll be massively trolled by the lovers of the web show. There’ll be comparisons of Abhishek Bachchan’s performance and look with that of Pratik Gandhi. Even the other actors as well as the dialogues and music will face the wrath.”

The source also added that Producer Ajay Devgn, Abhishek Bachchan and co-actors Sohum Shah and Nikita Dutta had shot for an episode of The Kapil Sharma Show way back on November 4. They were hoping that the hype around Scam 1992 would die down soon but because nothing as such happened, they have pushed the release to next year. The Big Bull: Abhishek Bachchan Drops The First look Of His Upcoming Film; Ileana D'Cruz to Play The Female Lead.

While these rumours are making rounds on one side, an insider has told Bollywood Hungama that the delay in the release of the film is because of Abhishek contracting the coronavirus. The shoot got delayed and hence the team started the post-production of the film late as well. The insider also revealed that the team shot The Kapil Sharma Show episode early because Ajay Devgn did not have any dates in the coming months. The film also star Ileana D'Cruz in a pivotal role.

(The above story first appeared on LatestLY on Dec 17, 2020 02:27 PM IST. For more news and updates on politics, world, sports, entertainment and lifestyle, log on to our website latestly.com).