Rani is returning again as Shivani for the sequel, Mardaani 2, that is directed by newbie Gopi Puthran, who had also written the first film. 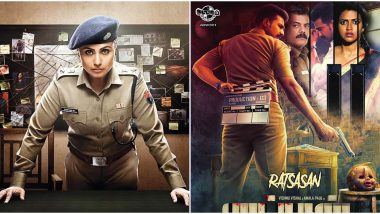 The Posters of Mardaani 2 and Ratsasan (Photo Credits: Twitter)

in 2014, Rani Mukerji scored the sleeper hit of the year in the investigative thriller, Mardaani. The movie, directed by Pradeep Sarkar, had her play a tough no-nonsense cop, Shivani Shivaji Roy, chasing after a young kingpin of drugs and child-trafficking (Tahir Raj Bhasin in his breakout role). Five years later, Rani is returning again as Shivani for the sequel, Mardaani 2, that is directed by newbie Gopi Puthran, who had also written the first film. Mardaani 2 Trailer: Rani Mukerji is Back as the Badass Cop Shivani Shivaji Roy Who Will Fight Hard to Stop Crimes Against Women (Watch Video).

The trailer of Mardaani 2, produced by Yash Raj Films, had been unveiled some time back, and it gives an impression of being a taut thriller with some gritty moments. This time, Shivani is chasing after an unseen killer who is mutilating and killing young girls and then easily giving the cops a slip, even going on to taunt Shivani on phone. Newbie Vishal Jethwa is playing the sadistic antagonist, though we really don't get to see his face in the trailer properly.

Watch the trailer of Mardaani 2 here:

Is it me or does the film remind you of the Tamil film Ratsasan, that came out last year? Ratsasan, directed by Ram Kumar, was itself inspired by a 1958 German film, Es geschah am hellichten Tag. Vishnu Vishal and Amala Paul play the main leads in the film that is about a serial killer who kills and desecrates the bodies of his young female victims. Sounds familiar? ‘RATSASAN Not Nominated in Any Category in Yet Another ‘AWARDS”, Tweets Vishnu Vishal; Did He Hint at SIIMA 2019?

Vishu Vishal plays the cop who is trying to catch the killer, while figuring out his motives, while Amala Paul plays a teacher and his love interest.

Watch The Trailer of Ratsasan here:

You can also catch the full movie on Hotstar.

On release, Ratsasan received acclaim for its grim but thrilling premise and execution, and Vishnu's performance. The movie also went on to become a big hit in Kollywood, and managed to get a spot in most of the critics' top 10 films of the year. So peeps who have watched Ratsasan, does Mardaani 2 give you similar vibes? Share your thoughts in the comments section below.

(The above story first appeared on LatestLY on Nov 14, 2019 12:43 PM IST. For more news and updates on politics, world, sports, entertainment and lifestyle, log on to our website latestly.com).