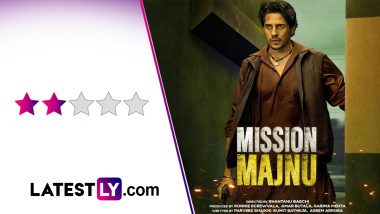 Mission Majnu Movie Review: Shantanu Bagchi's Mission Majnu belongs to the genre of spy dramas and thrillers that has become oversaturated in the recent nationalist wave. Be it in cinema or on OTT, we are getting atleast one spy saga nearly every week and TBH, it is difficult to extract some sort of freshness in these attempts. Mission Majnu is based on real-life events narrating the fictional undercover RAW agent in Pakistan set against the real backdrop of Indo-Pak political play over nuclear domination in the '70s. Sidharth Malhotra plays the main lead, with Rashmika Mandanna as the female lead. OTT Releases Of The Week: Lior Raz's Fauda Season 4 on Netflix, Sidharth Malhotra's Mission Majnu on Netflix, Rakul Preet Singh's Chhatriwali on ZEE5 & More.

The movie begins after the Indo-Pak war of 1971. Pakistan government is still licking the wounds of the defeat, and in 1974, after India successfully carries out its first nuclear test in Pokhran, they are also looking to carry out the same, albeit secretly, while admonishing India in front of the world. However RAW head (Parmeet Sethi) learns of these plans and he wants to expose Pakistan's double-play in front of India's Prime Minister.

Meanwhile we meet Tariq (Sidharth Malhotra), a tailor in Karachi who finds employment with a shop that makes uniforms for Pakistani army. He also falls in love with Nasreen (Rashmika Mandanna), the visually impaired niece of his employer, whom he later marries. Now Nasreen might not be able to see, but her other senses, well, they aren't very consistent as well. Early in the movie, she is able to recognise Tariq whenever he hails the rickshaw for her from the perfume he uses. However, she fails to recognise her husband's voice in the climax despite him shouting at the top of his voice.

Nasreen also seems fine that her husband is inexplicably absent for long stretches, even though it is at a time that she needs him the most when she is pregnant. You see, even though she is oblivious of it and we are not, Tariq is actually Amandeep Singh, a RAW sleeper agent whose father was once accused of being a traitor. It is of course a trite character trope given to the protagonist - trying to shake off an old baggage - which leads to several taunts being thrown at him by his handler (Zakir Hussain), questioning his patriotism.

Now Tariq is assigned to 'Mission Majnu', the operation to discover if Pakistan government is secretly carrying out a nuclear test and where it might happen. Don't ask me why it is called 'Mission Majnu', a catchy name for sure and suits the leading man's good looks, and the name somewhat predicts the outcome of where the story is heading.

Watch the Trailer of Mission Majnu:

Mission Majnu covers two plotlines. One is of Tariq and his two associates trying to seek the truth of Pak's nuclear program. There are some twists and turns, a couple of them feel interesting, like Tariq trying to follow the trail of clues staa European closet, which in the '70s is shown to be a big deal. However, the thrills feel very uneven, thanks to some predictable writing, and the action sequences uninteresting and unconvincing, thanks to convenient close-up angles, editing, and use of slow-motion (watch out for the scene where Tariq jumps out of a train and passes through the rails of the bridge, that's prominently shown in the trailer as well).

Speaking of the trailer, there was already a humorous chatter on social media on how Sidharth Malhotra's character is making it oblivious that he is an undercover spy. I wish I could say that the movie changes that opinion. Tariq's behaviour in certain scenes feels quite over-enthusiastic and evident that there is something off about him, and considering he is supposed to be the top cadet in his batch, that's unintentionally hilarious. But then so does James Bond too, but Bond has game...

The other track is of political upheavals in both the countries going through regime changes - electorally in one, forced in another - and how that affects Pakistan's nuclear plans and India's ties with the country. This felt a more interesting plotline, considering it draws inspirations from real-life events and brings out political figures like former Indian Prime Ministers Indira Gandhi and Morarji Desai, and then Pakistan heads like Zulfikar Ali Bhutto and General Zia Ul Haq. Could have made for better viewing experience, though, hadn't these scenes feel like they have made in the same whimsical mould as The Accidental Prime Minister, which makes it hard to make these scenes feel compelling, even if they have a factual basis. There is a shallow discourse going on that makes the sequences have a feel some kind of a stage-play rather than being part of a movie.

The makers of Mission Majnu seem no fan of late Morarji Desai, who is shown to be indirectly responsible for certain killings that happens in the third act. Even his approach to wanting to maintain peace between Indian and Pakistan is shown to be blindsided, and this is a film where the hero proudly claims how we might be the only country who got our independence through peace and love.

Forget the political discourse, Mission Majnu also feels like a pale shadow of Sidharth's last OTT release, Shershaah, which was deemed a 'blockbuster' even with its direct streaming release. The love story struggles because the movie ignores Nasreen for most of the time, once the spy games start, and the downbeat climax lacks the depth to be emotionally resonant. The spy thriller aspect lacks the technical finesse to stand apart. Even the music passes muster.

It's not that the film hasn't had its smart merits. A playful reference to Sholay early on is given a tragic callback later to the death of a certain character. The movie takes digs at armchair 'patriots' who question others' national integrity. Yet for all its 'noble' intentions and pokes, Mission Majnu just can't acquit itself of an inherent Islamophobia while being a pretty average thriller.

Mission Majnu might have a lesser-told story in the Indo-Pak brittle relations to explore, and yet it doesn't have the substance or performances to be a standout. Overall it turns into an average watch thanks to its by-the-numbers approach and template attitude, in a genre that has better fare like D-Day and even web-series like Mukhbir. Mission Majnu is streaming on Netflix.

(The above story first appeared on LatestLY on Jan 20, 2023 01:44 PM IST. For more news and updates on politics, world, sports, entertainment and lifestyle, log on to our website latestly.com).