Neetu Kapoor Birthday: Riddhima Kapoor Sahni and Ranbir Kapoor Pose With Their Mother For a Cute Pic On Her Special Day (View Post)

Recently, Riddhima Kapoor Sahni took to Instagram to wish her mother on her birthday with a sweet post. 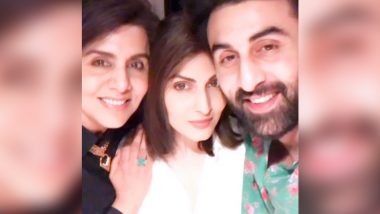 Neetu Kapoor celebrates her birthday on July 8 and we are sure, this year it's going to be all too different for the actress as husband Rishi Kapoor won't be there to ring in the same. Rishi Kapoor left for heavenly abode in April this year after battling cancer for a few years. The Kapoors have had a hard time dealing with his death but Neetu's kids, Ranbir Kapoor and Riddhima Kapoor are making sure to stand tall with their mother in this difficult time. Riddhima has been a pillar of strength for Neetu amid this time. Recently, Riddhima Kapoor Sahni took to Instagram to wish her mother on her birthday with a sweet post. Neetu Kapoor Shares An Old Picture With Rishi Kapoor, Says 'Value Your Loved Ones As That's Your Biggest Wealth'.

In a special birthday post for her mother, Riddhima shared an adorable selfie of her and Ranbir along with Neetu Kapoor and wrote, "Happiest bday my Iron Lady I love you so much Ma." The trio look too cute in this picture and we can't help but miss seeing Rishi Kapoor in this cute frame. The picture was also liked by Ranbir Kapoor's girlfriend, Alia Bhatt who has also constantly been with this family amid this difficult time.

Happiest bday my Iron Lady I love you so much Ma ❤️

A post shared by Riddhima Kapoor Sahni (RKS) (@riddhimakapoorsahniofficial) on Jul 7, 2020 at 11:36am PDT

Neetu Kapoor who turns 62 today has been a popular Bollywood actress who starred in films such as Khel Khel Mein, Amar Akbar Anthony, Do Dooni Chaar among others. Kapoor was a child artist in the industry who initially worked under the name of Baby Sonia when she was 8. Over the years, she has played some amazing roles on-screen and we wish this Bollywood diva a very Happy Birthday!

(The above story first appeared on LatestLY on Jul 08, 2020 09:26 AM IST. For more news and updates on politics, world, sports, entertainment and lifestyle, log on to our website latestly.com).