New Pair Alert! Arjun Kapoor and Rakul Preet Singh to Star in a Family Dramedy Which Will Be Produced by John Abraham

Confirmed! Arjun Kapoor and Rakul Preet Singh to share the screen space together for the first time in a yet to be titled film which will be produced by T-Series. Have a look! 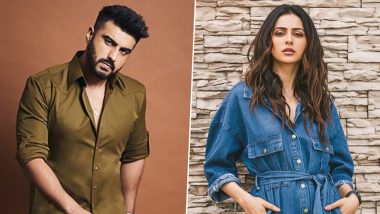 For the first time ever, Bollywood actor Arjun Kapoor and Rakul Preet Singh will be seen sharing the screen space together, reports Mumbai Mirror. The two stars have been confirmed for a yet to be titled film. Further, the reports elaborate that the storyline of the flick will be about a cross-border family dramedy. This one will be produced by Nikkhil Advani, Bhushan Kumar and John Abraham. For the unversed, the trio have earlier collaborated for three films namely Batla House, Satyameva Jayate and Satyameva Jayate 2. Arjun Kapoor's Panipat Beats Salman Khan's Dabangg 3 to Be the Most Anticipated Indian Movie as per IMDB.

Helmed by debutante, Kaashvie Nair, the film will see the two leads romancing each other. Talking about Nair, she is not at all new to the film business as she has earlier assisted Nikkhil in Patiala House and action thriller D-Day. She has also co-directed the TV series POW Bandi Yuddh Ke. Panipat: Arjun Kapoor Looks Brilliant as the Fierce Maratha Warrior Sadashiv Rao Bhau (View Pic).

Check Out The Tweet Confirming The Same By Taran Adarsh Below:

Revealing more about the film, Nikkhil Advani in the interview said, “It is a coming-of-age, cross-border love story, beautifully written by Anuja Chauhan, Amitosh Nagpal and Kaashvie. It will be shot extensively in Punjab and Los Angeles and will feature Arjun and Rakul in never-seen-before avatars. We will be locking the title and the release date soon.”

(The above story first appeared on LatestLY on Nov 06, 2019 12:14 PM IST. For more news and updates on politics, world, sports, entertainment and lifestyle, log on to our website latestly.com).