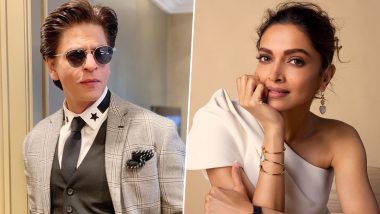 Superstars Shah Rukh Khan and Deepika Padukone will be shooting a song in Spain for the upcoming film Pathan, directed by Siddharth Anand. Shah Rukh and Deepika will not only shoot crucial parts of their film in Spain but will also shoot a massively mounted song there. #AskSRK: From Pathan’s Release To ‘Cool’ for Thalapathy Vijay, Shah Rukh Khan Reveals It All in a Fun Session on Twitter!

A source said: "No Bollywood film has ever shot song sequences in these places. Sid Anand will shoot a spectacle of a song in Spain and things are totally under wraps to control all possible leaks. The intent is to create a song that is visually so grand that it is an instant hit. "All necessary permissions are being worked on for a smooth shooting experience in Spain." Did Shah Rukh Khan Just Drop a Hint About Resuming Pathan’s Shoot With His Recent Bearded Selfie?

The source shared that Pathan is "turning out to be an insanely awaited visual extravaganza". Added the source: "Sid Anand and Aditya Chopra want to redefine Indian cinema on the world map and every attempt is being made to achieve this goal." Pathan also stars John Abraham. Other details about the movie are still under wraps.

(The above story first appeared on LatestLY on Aug 28, 2021 01:28 PM IST. For more news and updates on politics, world, sports, entertainment and lifestyle, log on to our website latestly.com).