It has been more than 18-and-half-years since the romantic drama Rehnaa Hai Terre Dil Mein hit the big screens. Although this movie did not manage to earn a whopping figure at the box office, it did manage to win hearts of the audiences. 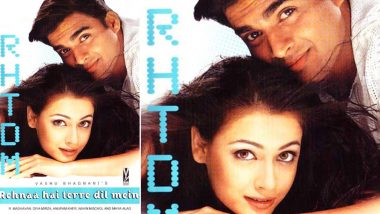 It has been more than 18-and-half-years since the romantic drama Rehnaa Hai Terre Dil Mein hit the big screens. Although this movie did not manage to earn a whopping figure at the box office, it did manage to win audiences hearts. From the lead pair R Madhavan and Dia Mirza’s onscreen chemistry and the heartwarming story and to the perfect love songs, RHTDM was everyone’s favourite then and even now. Movie buffs who couldn’t get over this flick, here’s a great news for all of you. As per latest reports, the sequel of Rehnaa Hai Terre Dil Mein is in the making! R Madhavan Goes Back to RHTDM Days as the 'Maddy' in Him Discovers New Vegan Chicken!

Sources have revealed to Mid-Day that the script of RHDTM sequel is in the ‘final stage of development’. The source was quoted as saying, “The makers toyed with some concepts, on and off, over the years. Only now have they found a script that has appealed to everyone and seems a natural progression to the lives of Maddy and Reena (the characters essayed by Madhavan and Mirza respectively). The script is in the final stage of development.” The report also mentions that this sequel will revolve around Maddy and Reena’s post-marital lives. Now, neither R Madhavan nor Dia Mirza or the makers have confirmed anything about it yet. RHTDM Reunion! Dia Mirza and R Madhavan Collaborate For a Chit-Chat On Nature and Animals (Watch Video).

But if you remember, last month Dia Mirza had gone Instagram Live along with co-star R Madhavan. It was during that session she had dropped hints about the sequel. She was quoted as saying, “We are doing our best to make it happen, but we will only work together when we can give our best. There is something so special about Reena and Maddy and I think there was an innocence and honesty we shared in RHTDM that resonates so deeply with everyone even today. We wouldn’t want to dilute that in any way.” So are you excited to see R Madhavan and Dia Mirza back together in RHTDM sequel?

(The above story first appeared on LatestLY on Jun 22, 2020 09:46 AM IST. For more news and updates on politics, world, sports, entertainment and lifestyle, log on to our website latestly.com).