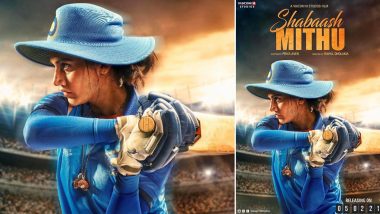 Rahul Dholakia says even though the production on the Mithali Raj biopic “Shabaash Mithu” is on halt due to the nationwide lockdown, he is impressed with the dedication of actor Taapsee Pannu, who is utilising her time at home polishing her cricketing skills. Taapsee is essaying the role of the Indian women's cricket team captain in the upcoming film backed by Viacom18 Studios. “Taapsee is a perfectionist. She has started training. We have people coaching her and we were supposed to start the training process by March end or April beginning but then the lockdown happened and everything went for a toss. Shabaash Mithu: Mithali Raj Is Hopeful About Her Biopic Starring Taapsee Pannu, Says ‘Want It to Inspire Young Girls to Take Up Cricket’

“Taapsee knows the game and she is doing some training herself as we can't expect someone to go and train her at this time,” Dholakia told PTI.

The filmmaker, best known for directing movies such as “Parzania” and “Raees”, said the shooting and training schedule of “Shabaash Mithu” has been affected by the coronavirus–induced nationwide lockdown. Shabaash Mithu: Taapsee Pannu Shares First Look Of Cricketer Mithali Raj’s Biopic Releasing On February 5, 2021 (See Pic)

“The film was supposed to go on floors in July. I think after the lockdown is lifted, it will go on floors hopefully this year. We had thought of Mumbai and Hyderabad as the location, but now we will have to see which places are shooting friendly,” he added. However, the delay won't affect the film's content, said Dholakia. “We will not compromise on the script and screenplay. The audiences shouldn't feel cheated. We will do it cleverly and not compromise at any cost.” “Shabaash Mithu” is scheduled to be released on February 5 next year.