The teaser of the sports biopic Shabaash Mithu starring Taapsee Pannu in the lead role was released on Monday. 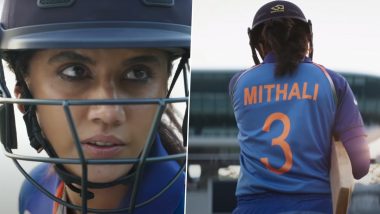 The teaser of the sports biopic Shabaash Mithu starring Taapsee Pannu in the lead role was released on Monday. The film is based on the life of Mithali Raj, the skipper of the Indian women's cricket team, who is known as the game changer of cricket in India. Shabaash Mithu Teaser: Taapsee Pannu Is Here To Win Hearts As Indian Cricketer Mithali Raj (Watch Video).

The teaser showcases the achievements of the Mithali in the gentleman's game with a final shot of Pannu's character's eyes peeled on an incoming delivery. The film, which has been shot across domestic and international locations, follows the life, the highs and lows, setbacks, and moments of euphoria that define the legend of Mithali. Shabaash Mithu: Taapsee Pannu Shares a Beautiful New Poster of Mithali Raj’s Biopic on International Women’s Day 2022 (View Pic).

Shabaash Mithu, which also stars Vijay Raaz in a key role, has been directed by Srijit Mukherji under Viacom18 Studios with a script by Priya Aven and Ajit Andhare serving as the creative producer.

(The above story first appeared on LatestLY on Mar 22, 2022 01:32 PM IST. For more news and updates on politics, world, sports, entertainment and lifestyle, log on to our website latestly.com).