Shahid Kapoor's Jersey To Release On Diwali 2021; The Actor's Last Diwali Release Didn't Even Have His Name In The Credit

Shahid Kapoor gets his maiden Diwali release with Jersey which is all set to hit the theatres on November 5, 2021. It might come as a surprise to many that despite being in the industry since 2003, none of his other movies got the Diwali berth even when Shah Rukh Khan wasn't around to claim it. So Jersey will be a special one for him. 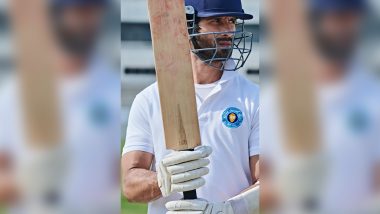 Shahid Kapoor's Jersey is a remake of a Telugu film of the same name and will release on Diwali this year. The festival has always been a cynosure of all attention in the film industry as it has most of the time led to rich dividends at the box office. But do you know Jersey is many firsts for Shahid Kapoor? This is his first Diwali release since his debut in 2003. Now if you consider Dil Toh Pagal Hai here, Jersey will be his second Diwali release. The only difference being Shahid wasn't even credited in DTPH. Jersey: Shahid Kapoor Wraps Shooting of His Upcoming Sports Drama, Says ‘47 Days of Shoot During COVID’ Was ‘Just Unbelievable’

You all are aware that Shahid Kapoor was part of Shiamak Davar's troupe who worked on DTPH and Taal. You might even have noticed him dancing amongst the many background dancers with Karisma Kapoor in front or in Taal, with Aishwarya Rai Bachchan. Dil Toh Pagal Hai was 1997's Diwali release if you remember and starred Shah Rukh Khan and Madhuri Dixit, apart from Karisma Kapoor.

JERSEY releasing in theatres this DIWALI 5th November 2021. The triumph of the human spirit. A journey I am so very proud of. This ones for the TEAM .... @mrunal0801 @gowtam19 @GeethaArts@theamangill @SVC_official @SitharaEnts pic.twitter.com/WvDz7llMpv

Jersey is a story about a has-been cricketer who returns to the game in his late thirties for his country and also to get a Jersey for his son.

(The above story first appeared on LatestLY on Jan 18, 2021 03:48 PM IST. For more news and updates on politics, world, sports, entertainment and lifestyle, log on to our website latestly.com).