As the versatile actor, Sharad Kelkar celebrates his 45th birthday today (October 7), we bring to you his career's best five performances where he was a scene-stealer and how. Read on! 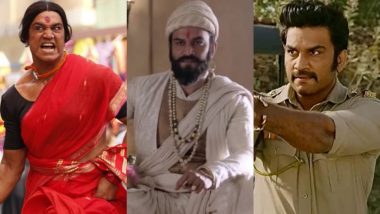 If it’s the story of a film that glues the audience till the end, then it’s the actor’s brilliant performance that makes a lasting impression. One such actor who has been ruling hearts is Sharad Kelkar. Right from being a gym instructor, television supremo to now making his presence felt in mainstream cinema and OTT, the man has come a long way. Well, he has the power to attract everyone with his method of acting and the rest is history. And as the actor celebrates his birthday today (October 7), we list some of his scene-stealing performances from blockbusters that need a mention for sure. So, let’s get started. Sharad Kelkar, Amruta Khanvilkar, Tejaswini Pandit & Others Celebrate the Pride of Marathi Language with Anthem for Marathi OTT Platform Launch.

Even though the lead star of the film was Akshay Kumar, it was Sharad Kelkar’s role as Laxmi that was beautiful and powerful. His 15-minute cameo as a eunuch who went through pain, love, and whatnot throughout his life is beyond words. Stellar is the word!

Sharad played the role of Chhatrapati Shivaji Maharaj in Tanhaji and proved he’s the most underrated actor in showbiz. Getting into the skin of a Maratha emperor is not an easy task, but Kelkar nailed the act. Be it flaunting his strong physique or sentimental side, he was impeccable.

Ajay Devgn’s historical drama was heavily criticised by fans as well as the audience for its poor storytelling. However, it was Sharad’s screen presence that looked sincere and can be termed as the best thing in the movie. He played the role of military officer RK Nair in Bhuj.

This film saw Sharad Kelkar as a villain, yet he shined. Just how he packed many powerful punches in action sequences opposite Ajay Devgn, the exact same he was as a performer in each frame of the film. He is definitely class apart!

Kelkar portrayed the role of Kanji in the film. There is a superb scene of the actor in this Sanjay Leela Bhansali's magnum opus where he shoots a man sitting right next to Ranveer Singh. Well, right from his body language to attitude, all was perfect in this flick. The Family Man: Sharad Kelkar Asks Twitterati To Give Ideas for Season 3; Fans Come Up With Interesting Theories for Manoj Bajpayee's Series.

That’s it, guys! These are the top five roles of the actor where he stole the show. Despite several obstacles in his professional life, he has come out strong and has always given his best as an artist. Here’s wishing Sharad Kelkar a great 45th birthday. Stay tuned!

(The above story first appeared on LatestLY on Oct 07, 2021 08:10 AM IST. For more news and updates on politics, world, sports, entertainment and lifestyle, log on to our website latestly.com).