Chandrayaan 2, India's second lunar mission will be launched on Monday from Sriharikota and if this news doesn't fill your chest with pride then we don't know what will. 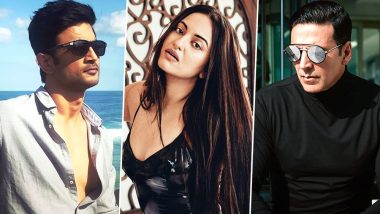 It's a proud moment for India as ISRO gets ready to launch Chandrayaan 2 tomorrow. The mission is making headlines all over and for all the right reasons. India's second lunar mission will be launched on Monday, July 13 at 2.51 AM from Sriharikota and if this news doesn't fill your chest with pride then we don't know what will. As the nation gets ready to embrace this victory, our Bollywood stars too are busy sending congratulatory wishes to the ISRO for this big day. Akshay Kumar: Mission Mangal Belongs to Vidya, Sonakshi, Taapsee, Kirti, Nithya.

While Akshay had already tweeted his thoughts on M Vanitha and Ritu Karidhal, the women who are the driving force behind this new mission, Sushant Singh Rajput is the latest name to join the list. The Raabta actor cannot wait for the historic moment of the successful launch of Chandrayaan-2 and we completely share his excitement. Have a look at other celebs' tweets and join us in singing praises for ISRO. Mission Mangal Teaser Video: Akshay Kumar, Vidya Balan and Team Look Dedicated and Proud To Take on This Mars Mission.

India’s second space mission to the moon, #Chandrayaan2 is led by two women scientists of @isro , a first in India’s history! Sending my best to the rocket women and #ISRO team, more power to you! pic.twitter.com/AX6e8335YK

One of India's most important and prestigious space missions, #Chandrayaan2, is led by women, which also happens to be a first for @isro! Proud of our spacewomen.

Feeling proud of our spacewomen as they're ready to research on the moon! #Chandrayaan2 will be launched in a few hours which makes it the first and one of the most prestigious space missions led by the women of @isro #ISRO #ISROMissions pic.twitter.com/dfwlyQbaui

Interestingly, Akshay Kumar and Sonakshi Sinha's next release is Mission Mangal that revolves around India's first space mission to Mars. The film is a story about all the achievers and their brilliant minds who were responsible in helping India achieve this feat. The movie will hit the screens on August 15, 2019.

(The above story first appeared on LatestLY on Jul 14, 2019 05:09 PM IST. For more news and updates on politics, world, sports, entertainment and lifestyle, log on to our website latestly.com).