Soorarai Pottru is getting remade in Hindi by the original team of Suriya and director Sudha Kongara. While the Tamil actor is one of our top picks who could play the lead in the remake, we have a few other names as well. Check them out. 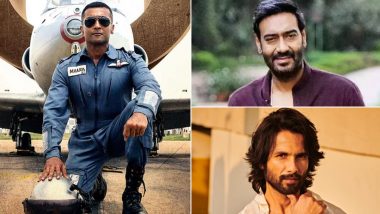 Soorarai Pottru is getting remade in Hindi by the original team of Suriya and director Sudha Kongara. It's only fair for the OG team to recreate the same movie in another language. The reason being they are aware of how the first movie was planned and made, after all, experience matters. Now what comes as an interesting aspect of this announcement is that there is no confirmation if Suriya will reprise his role for the Hindi version as well. That allows a lot of room for conjecture on who could play the character in the remake. Of course, Suriya is one of our top picks as he has already lived and played the character perfectly in the Tamil film. But we do have others on the list as well, who could step into his shoes for the same. Captain GR Gopinath Reviews Surya’s Soorarai Pottru Which Is Based On His Life; Says It’s ‘Heavily Fictionalised’

Ajay Devgn is one actor who kind of gels with any character. He knows how to transform into the role that he is playing in a movie. Soorarai Pottru's needs an actor who is both intense and charming. Ajay seems like a suitable match for the same.

Shahid Kapoor has become quite the favourite for remakes these days what with Kabir Singh and Jersey. He has the mass appeal and the understated diligence to carry the role.

It goes without saying that Suriya will be more than a perfect match for the role because he has already done full justice to it in the Tamil version. It's been years since we have seen him in a Hindi film and what better it could be than the remake of Soorarai Pottru. We hope he is reading this! Soorarai Pottru: Suriya’s Film is ‘Third-Highest’ on IMDb But Doesn’t Feature on Site’s Top-Rated 250 Movies – Here’s Why

In the last couple of years, John has managed to keep his filmography populated with some full-blown massy actioners and subtle narratives like Parmanu. He wouldn't just bring class to the film but a huge mass appeal as well.

Saif Ali Khan adds a lot of nuance and elegance to a role whatever maybe the background of the character is. He surprised one and all with Langda Tyagi in Omkara and if given a chance, he could make this remake fly as well.

You can vote for our choices here or come up with a few new names in the comments section.

Who Should Play Suriya's Role In Soorarai Pottru?

(The above story first appeared on LatestLY on Jul 12, 2021 02:30 PM IST. For more news and updates on politics, world, sports, entertainment and lifestyle, log on to our website latestly.com).