Sushant Singh Rajput Case: Dino Morea Rubbishes Rumours of Hosting Late SSR At His House Party, Says ‘Do Not Drag My Name into This’ 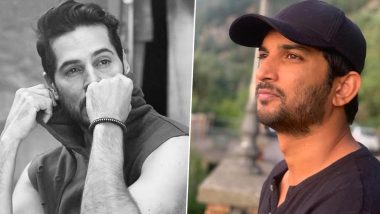 Actor Dino Morea has tweeted to deny reports that he had hosted a party at his residence on the night of June 13, where late actor Sushant Singh Rajput was present along with several high-profile guests. "There was never any such gathering at my residence, pls get your facts right before making these allegations. DO NOT drag my name into this as I have no connection whatsoever with this," Dino wrote on his official Twitter handle, @DinoMorea9. Sushant Singh Rajput Death Case: SC to Hear Rhea Chakraborty’s Plea Seeking Transfer of FIR from Patna to Mumbai Today

The actor's tweet came in reaction to former Maharashtra chief minister Narayan Rane telling the media that Dino had played host to Sushant and a "politician" at a party he organised at his residence on June 13, the day before Sushant's death. With his clarification tweet, Dino attached a news channel clip of Rane at the briefing. In the clip, it has been mentioned that after starting off at Dino's place, the party had moved to Sushant's apartment in Bandra. Sushant Singh Rajput’s Death: Bihar Governor Accords His Consent For CBI Probe in the Actor’s Suicide Case

There was never any such gathering at my residence , pls get your facts right before making these allegations. DO NOT drag my name into this as I have no connection whatsoever with this. https://t.co/IsxnKo4k4h

Sushant was found hanging at his apartment in Bandra on June 14. Post mortem report had claimed that the actor committed suicide. Investigation into the case is still on, with Mumbai Police and Bihar Police probing the case.

(The above story first appeared on LatestLY on Aug 05, 2020 12:09 PM IST. For more news and updates on politics, world, sports, entertainment and lifestyle, log on to our website latestly.com).