The Disciple is a Marathi-language film, directed by Chaitanya Tamhane. Roma director Alfonso Cuaron serves as an executive producer. The movie stars Aditya Modak and Arun Dravid. The Disciple is streaming on Netflix. 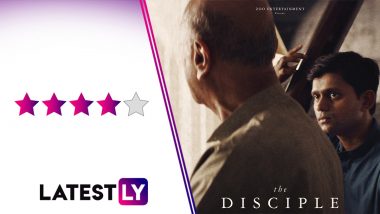 The Disciple Movie Review: When Jallikattu was nominated to be India's official entry for Oscars 2021 (it lost in the first round itself), celebrated columnist and critic Aseem Chhabra said that it was a wrong decision to do so. Especially when there was Chaitanya Tamhane's sophomore film The Disciple also was in contention, which he claimed had a better chance at getting nominated at least. While I was a huge shipper of Jallikattu then (and I am still in awe of the movie), after watching The Disciple recently, I realised Mr Chhabra did have a point. Chaitanya Tamhane’s The Disciple, Emraan Hashmi Starrer Harami Among Seven Indian Films to Be Screened at Busan Film Fest 2020.

It would have helped The Disciple's case acknowledging the international acclaim the film got during its festival run, even winning the FIPRESCI International Critics Prize at the Venice Film Festival. Forget the awards and the honours, that were well-deserved, The Disciple is simply a brilliant take on the psyche of a musician, who is in denial of the fact that he needs to move on from what he loves the most.

Sharad Nerulkar (Aditya Modak) is the titular disciple, learning music from a veteran in the Hindustani music scene, simply known here as Guruji (Dr Arun Dravid). Sharad not only learns the ragas from Guruji's dingy one room flat, but also takes care of Guruji's daily needs and finances, including taking him to the doctor.

Sharad, for all his efforts, feels like a very competent singer. He trains hard day and night to perfect his octaves. For motivations, he listens regularly to the tapes of Maai, another admired but underrated singer in the Hindustani scene whose reclusivity had made her an enigma. Sharad doesn't even take up a proper job because he can't think of anything beyond music. His only source of livelihood is making and selling tapes and CD's of lesser known classical singers, and he has a strong critique over the more popular ones.

So we are surprised when he loses a singing contest. To our untrained ear, he sang really good. We believe that the judges know nothing, and we share Sharad's disappointment as the camera keeps itself intact on the sombre protagonist sitting amongst the audience cheering for the winners. The Disciple: Alfonso Cuaron to Executive Produce Chaitanya Tamhane's Marathi Movie.

It is only when he trains with his fellow students in front of Guruji that we realise Sharad has still a long way to go when it comes be the best in his field. Once that realisation sets in, it is with a certain discomfort how we watch Sharad's daily life unfolds from hereon, as his frustrations of not getting the recognition he thinks he deserves.

The only man who could have given him a reality check - his Guruji - berates him for not getting the note right, but couldn't let him down. Maybe it is out of the selfish need of knowing that only Sharad is taking care of his every day need.

The Disciple is not a cheerful underdog success story we are often used to. What we see here is an underdog who refuses to quit even when nothing is working out for him, but his persistence doesn't pay off the dividends he wishes for. Even as he moves from an ambitious youngster to a frustrated middle-ager, his routine never changes. He becomes a teacher in classical singing (George Bernard Shaw did say, 'those who can do, does. Those who can't teaches'). He does his own concerts. He still listens to Maai's tapes as motivation and masturbates to porn like his younger self. But the recognition that he seeks continues to elude him, while he begins to get further irked by the success of his peers and even YouTube comments.

Even though The Disciple is more about a man facing heartbreak in a lot of ways, Chaitanya Tamhane doesn't make it a depressing watch. There are occasional doses of smart humour, and satirical digs without making it very obvious. Like there is what feels like this 'unnecessary' subplot of a classical trained singer in a reality show, that is used as another mental setback for Sharad. In any other movie, this was the opportunity for the protagonist to rant and patronise. Here, his silent viewings of her appearances on the show become admissible enough to show his increasing disappointment at his own stunted growth.

The static frames (cinematography by Michał Sobociński) allow the actors and the scenes more room to make the conversations and character development feel so natural. Especially it the flashback scenes that help us understand more how they shaped the protagonist's way of thinking, with the standout scene being the one where Sharad and his friend have drinks with a well-known art critic (it doesn't end well!).  It is also nice to see how the transformation of Mumbai as a city is shown so deftly as the protagonists traverses the paths on his two-wheeler.

The Disciple working both as a tribute and a critique to the Hindustani classical scene, there are some lovely ragas strewn around in the film. But the song that won my heart come at the very last scene of the film leaving it on a very poignant note.

Even though The Disciple doesn't feature any popular stars, there are some increding acting display here. Aditya Modak, a trained singer himself, is aptly cast as the conflicted Sharad delivering a performance that is quite evocative in his silent anguish. His body transformation for the three stages of his life depicted feels so natural. Special mention must also be given to Arun Dravid as Guruji. Even though she is never seen, the voice of the late Sumitra Bhave as Maai adds a surreal touch to the proceedings.

After a brilliant debut with Court, Chaitanya Tamhane continues to soar high as a filmmaker with The Disciple being just another fantastic effort that I liked better than his first film. If you are an admirer of classical music, then this is a must, must watch. The Disciple is streaming on Netflix.

(The above story first appeared on LatestLY on Apr 30, 2021 05:28 PM IST. For more news and updates on politics, world, sports, entertainment and lifestyle, log on to our website latestly.com).