The Girl on the Train: From Parineeti Chopra-Emily Blunt to Avinash Tiwary-Justin Theroux, Who is Essaying Which Hollywood Actor's Role in the Hindi Remake

By now we know that Parineeti and Avinash Tiwary will be seen romancing each other in the film while Aditi Rao Hydari is essaying the character of a happy woman with a stable life, the one who dies in the story. 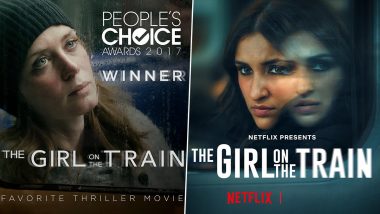 With just a day left for the online premiere of The Girl On The Train, fans are excited to see what Parineeti Chopra and the team has to offer to them. The film which is the Hindi remake of Emily Blunt's 2016 released film has already impressed everyone with the trailer and the songs and now people are waiting to see how well Parineeti steps into the shoes of Emily Blunt's character. While the makers of the Hindi adaptation have always maintained that they have added their own touch to the story, we see similar characters in the film. The Girl on the Train Trailer: Is Parineeti Chopra a Murderer or Not? Watch the Actress Take You On ‘One Hell of a Ride’.

By now we know that Parineeti and Avinash Tiwary will be seen romancing each other in the film while Aditi Rao Hydari is essaying the character of a happy woman with a stable life, the one who dies in the story. Kirti Kulhari will be seen essaying the role of the police officer who investigated Aditi's murder. Parineeti is a prime suspect because she often used to follow Aditi and was envious of her stable life. This had us wondering which Bollywood actor was reprising which Hollywood actor's role and how well will they be able to portray it on screen. After connecting the dots, we now have a list for you.

Check out who will be essaying which character from the Hollywood film in this Hindi adaptation:

Parineeti Chopra will be stepping into the shoes of Emily Blunt's character. Emily's character Rachel Watson is a lonely alcoholic who is the prime suspect in the murder. Parineeti's character is named Mira Kapoor and she is married to Avinash's character in the film.

Avinash will be seen essaying the role of Justin Theroux, Rachel's ex-husband. Justin's character is named Tom Watson who was married to Rachel initially and then divorces her to marry Rebecca Ferguson's character, Anna Watson. Tiwary's character is named Abhimanyu Shroff. While in the original story, Anna and Tom's relationship goes sour as the story moves forward, we want to see how it will unfold in the Hindi adaptation. However, the trailer of the Hindi remake has avoided showing Anna's character, so we are curious to see if this relationship angle would be used in the new version.

Haley Bennett's character Megan Hipwell will be essayed by Aditi Rao Hydari. Her character dies in the story after being murdered, possibly by Parineeti. While Megan was Anna and Tom's nanny in the Hollywood version, we dont know if it will be the same relationship in the Hindi adaptation as well. Aditi Rao's character, Nusrat is married to newbie Vishakh Vadgama's character.

Kirit Kulhari will be essaying the role of the detective who will be investigating the murder. She looks quite impressive in the new avatar and her fans are excited to see her play yet another powerful role. Her character is named Aaliya Shergill, and this role was essayed by Allison Janney (DS. Riley) in the Hollywood version. Parineeti Chopra, Avinash Tiwary's The Girl On The Train to Premiere on Netflix on February 26.

Vishakh Vadgam will be making his debut with Parineeti's film. He will be stepping into the shoes of Luke Evans' character Scott Hipwell in the Hindi remake. He is married to Aditi Rao Hydari's character Nushrat in the film. His character is named Kunal Yashwardhan.

Now that you know who essays which character in the Bollywood adaptation, we think the movie will become even more interesting for you to watch. Helmed by Ribhu Dasgupta, the film will premiere on Netflix tomorrow (February 26)

(The above story first appeared on LatestLY on Feb 25, 2021 03:44 PM IST. For more news and updates on politics, world, sports, entertainment and lifestyle, log on to our website latestly.com).