Varun Dhawan's October, Dwayne Johnson's Rampage or Prabhu Deva's Mercury - Which of These Movies is Your Weekend Pick?

So which of these movie are on your watch-list this weekend? 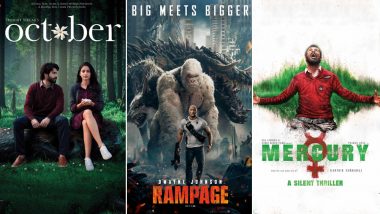 This week, we have three big movies to watch out in the theatres. One movie is from Bollywood, one is from Hollywood and one has no language. So there is October, starring Varun Dhawan, that could be his most unusual movie till date, after Badlapur.

Competing with him is his idol, Dwayne The Rock Johnson, fresh off the success of Jumanji: Welcome to the Jungle, is ready with his new potboiler, Rampage. Interestingly, the third movie of the week also has an interesting Varun Dhawan connection. Mercury stars Prabhu Deva, who recently danced with Varun in the IPL opening ceremony, as well as co-starring with him in Remo D'Souza's Dance movie.

So here are the three major releases of the week.

This unusual love story is directed by Shoojit Sircar of Vicky Donor, Madras Cafe and Piku fame. We have seen Varun Dhawan entertain us in potboilers like Badrinath Ki Dulhania and Judwaa 2, so seeing him in this abstract movie is definitely a refreshing change.

If you are a sucker for movies where cities get destroyed and of Dwayne Johnson, then Rampage is for you. The Rock is fighting a giant gorilla, a terrifying flying wolf and a menacing crocodile. What else do you need to watch when you munch on that popcorn?

Mercury is an unusual horror movie, as in there is no dialogues in the movie. Prabhu Deva is playing a ghoulish entity in the quirky movie, that will showcase some of his dancing ability. Mercury is directed by the very talented Karthik Subbaraj, who made some amazing movies in Tamil like Pizza, Jigarthanda and Iraivi.

So which of these movie are on your watch-list this weekend?

(The above story first appeared on LatestLY on Apr 12, 2018 11:21 AM IST. For more news and updates on politics, world, sports, entertainment and lifestyle, log on to our website latestly.com).