Virat Kohli and Anushka Sharma's Romantic Dance Video is too Hot to Handle!

Meanwhile, the 29- year- old actress is hell bent on scaring everyone with her haunting look in Prosit Roy directed Pari. 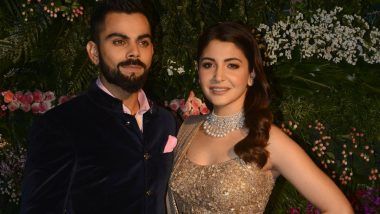 Anushka Sharma and Virat Kohli's fans are always enthusiastic about the little details of their love life. Not that we complain, especially when such is the chemistry between the top celebs. Their wedding, honeymoon, vacations everything was penned down minutely in the leading publications and portal, given to the fact that they were actually very, very dreamy. Virushka's starry receptions in Delhi and Mumbai were also talked about for long. The Mumbai reception was totally star studded with who's who from the cricket world and tinsel town. From the same reception, a video has now emerged where this adorable couple is seen dancing like no one's watching and we mean it!

With her shimmery lehenga and red chuda on point, Anushka did not care about anyone as she had a fun close dance with her handsome husband. The duo grooved and coordinated with each other, also flaunting their own moves. Check out the video here.

@anushkasharma & @virat.kohli dancing away at their Mumbai reception 💗💃🏻 #Virushka #VirushkaReception

Meanwhile, the 29- year- old actress is hell bent on scaring everyone with her haunting look in Prosit Roy directed Pari. The teaser has already helped her garner appreciation for the stellar performance in the movie. The horror flick which is made under her own home banner 'Clean Slate Films' is scheduled to release on March 2.

Post Pari, this diva will be seen in Shah Rukh Khan and Katrina Kaif starrer 'Zero'. Besides this, there is another ambitious film 'Sui Dhaaga' directed by Sharat Katariya. The desi avatar donned by lead stars Anushka and Varun Dhawan are adored by the fans already. Coming back to Virat Kohli and Anushka Sharma, don't they look super-cute together? They always do!

(The above story first appeared on LatestLY on Feb 13, 2018 03:45 PM IST. For more news and updates on politics, world, sports, entertainment and lifestyle, log on to our website latestly.com).