With ""Ooh La La", composer duo Vishal-Shekhar gave one of last decade's most rocking desi songs in the 2011 Hindi film The Dirty Picture. The musical chartbuster was sung by Bappi Lahiri and Shreya Ghoshal, and was one of the most popular songs of that year. 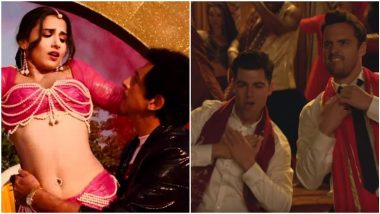 With "Ooh La La", composer duo Vishal-Shekhar gave one of last decade's most rocking desi songs in the 2011 Hindi film The Dirty Picture. The musical chartbuster was sung by Bappi Lahiri and Shreya Ghoshal, and was one of the most popular songs of that year. The track was picturised on Vidya Balan, who played a character inspired by the late actress Silk Smitha, and Naseeruddin Shah, who played a popular ageing superstar in this Milan Luthria movie. The song was so catchy that it even featured in an American sitcom! AR Rahman Birthday Special: 5 Hollywood Movies of Ryan Reynolds, Denzel Washington, Nicolas Cage That Dropped Lovely Rahman Surprises

New Girl, created by Elizabeth Meriwether with certain episodes directed by Jumanji fame Jake Kasdan, was a popular sitcom that ran between 2011 and 2018. Starring Zooey Deschanel, Jake Johnson, Max Greenfield, Lamorne Morris and Hannah Simone in the lead, the series was about a school-teacher Jess (Deschanel) who shares a flat with three men, and eventually falling in love with one of her male roommates, Nick (Johnson). Another of her roommates, Schmidt (Greenfield) falls for her best friend and model Cece Parekh (Simone), later gets engaged and then married to her.

And it is during their engagement party in the episode named "Big Mama P"(Season 5, episode 1) is where The Dirty Picture song comes into play. Cece is Indian (the actress playing her is half-Indian), therefore Jess decides to have a dance performance at her engagement party, and it is this song that she chooses for her group to perform. Zooey Deschanel Birthday: 5 Times the New Girl Star Impressed Us With Her Varied Fashion Choices from Playful to Subtle.

The dance becomes more important later in the episode, after Cece's conservative mother comes to meet her daughter, without knowing she is engaged to a white Jewish boy. The lady used to be a Bollywood dancer, so Jess advises Schmidt to dance to this song, later joined by Nick and the fourth roommate Winston (Morris), along with an Indian lady that Nick accidentally kidnaps from the airport.

The result is one of the most memorable scenes from the series, that while, it didn't impress Schmidt's future mother-in-law, but made his fiance fall more in love with him.

Not the first time that a Bollywood song has found its way to American shows and movies. Dil Se's "Chaiyya Chaiyya" featured in the intro scene of the Clive Owen-thriller, Inside Man. China Gate's "Chamma Chamma" was used in Nicole Kidman's Moulin Rouge, Gumnaam's "Jaan Pehechaan Ho" was placed in Scarlett Johansson's Ghost World and so on.

(The above story first appeared on LatestLY on Feb 11, 2021 09:08 PM IST. For more news and updates on politics, world, sports, entertainment and lifestyle, log on to our website latestly.com).