Shooting of films, television serials and digital series will be allowed in non-containment zones in Maharashtra in the latest phase of the lockdown with certain conditions, as per an order issued by the state government on Sunday. 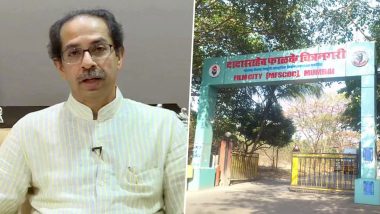 Mumbai, May 31 (PTI): Shooting of films, television serials and digital series will be allowed in non-containment zones in Maharashtra in the latest phase of the lockdown with certain conditions, as per an order issued by the state government on Sunday. Issuing a Government Resolution (GR), the Cultural Affairs Ministry said that producers will have to conduct pre-production and post-production works by adhering to the guidelines laid down by the government. Unlock 1: Cinema Halls Likely to Open In Phase III, Dates To Be Decided Later.

"Violation of the rules will lead to stopping of the work," it said. Producers will have to apply to the Managing Director of the Maharashtra Film, Theatre, Cultural Development Corporation, the Dadasaheb Phalke Chitranagari in Goregaon, Mumbai, and to district collectors outside Mumbai for resuming shootings. Unlock 1: West Bengal Government Allows TV And Cinema Production Except For Reality Shows.

Check Out The Guidelines Below:

Maharashtra Government has issued standard operating procedure including a list of general guidelines for the media entertainment industry in view of #COVID19. #Unlock1 pic.twitter.com/9tmsnhoqiz

The order stated that social distancing norms will have to be followed strictly with focus on personal hygiene. "Crowd cannot be allowed to be gathered while shooting is on. Norms have to be adhered to while using air conditioning system (on sets). Precautions need to be taken while transporting shooting equipment, artists and technicians," the GR said. No Hugs, Kisses, Intimate Scenes and Grand Events To Be Shot Post Lockdown When Shoots Resume, Reveals Producer JD Majethia (Deets Inside).

Earlier in the day, the state government extended the lockdown in containment zones till June 30 and announced easing of restrictions and phase-wise resumption of activities in non-containment regions under the "Mission Begin Again".

Producer Ekta Kapoor soon took to Twitter to express her thanks to CM Uddhav Thackeray for granting the permission to help get the entertainment industry back on track.

Check Out Her Tweets Below:

Would like to express my sincerest gratitude to the honourable @CMOMaharashtra UddhavJi, for considering our requests to begin work in a phased out manner by easing restrictions on films and television shooting. (1/2)

Special thanks to Adesh Bandekar

& Nitin Vaidya for their relentless efforts to help the industry return to work,with new guidelines that still keep an individuals health above all else. ❤️🙏🏻 (2/2)

Indian Film and TV Producers Council (IFTPC) chairman, TV and web wing, JD Majethia told Pinkvilla, "We just received the order from Maharashtra CM Uddhav Thackeray. We would want to thank him who has given an orderly note allowing us to resume shooting with guidelines. We will do this with lot of responsibilities. We are in the process of discussion with the producers, federations and broadcasters to decide on the date. Hopefully, we will all begin shooting together depending on who is prepared and to what capacity."