After: The Journey of Anna Todd's Best-Seller from Being fan fiction on Wattpad to a Feature-Length Film

After is directed and written by Jenny Gage, After is based on the 2014 fiction novel of the same name by Anna Todd. 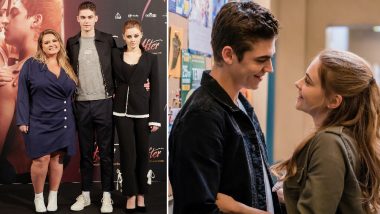 PVR Pictures is all set to bring, After, based on Anna Todd’s best-selling novel of the same name, which became a publishing sensation after beginning as fan fiction on the social storytelling sharing platform Wattpad. The movie is directed and written by Jenny Gage, After is based on the 2014 fiction novel of the same name by Anna Todd. The movie features Hero Fiennes Tiffin and Josephine Langford in prominent roles, alongside Selma Blair, Peter Gallagher, Jennifer Beals, Pia Mia,  and Inanna Sarkis.

After – an authentic tale of first love and self-discovery – began as fan-fiction online, posted one chapter at a time, almost daily, with the fans weighing in on what author Anna Todd was creating.“The beginning of After was me reading fan fiction,” says author Anna Todd. “I've always loved fan fiction, and I saw on Instagram where people were writing fan fiction about the band One Direction. I was the only one of my adult friends who liked One Direction's music. There's something infectious about them and their music that makes people happy. I joined the app Wattpad so I could read it. I had never thought about really writing fan fiction myself.”

Soon Todd had read everything available about the boy band on Wattpad, an online social storytelling platform where you can read and write for free. “I only wanted to read fan fiction about One Direction specifically, so I thought I'll just write a chapter. It was literally this random thought. I'm glad I didn't really think about it, otherwise, I would've never done it,” laughs Todd. “I'll write a chapter to entertain myself. After about three months it really started picking up, and eventually crashed the website. Wattpad reached out to me about publishing it as a novel. The book went to an auction and I got to choose the editor and publishing house that I wanted, which is literally like a writer's dream come true.”

(The above story first appeared on LatestLY on May 03, 2019 01:09 PM IST. For more news and updates on politics, world, sports, entertainment and lifestyle, log on to our website latestly.com).