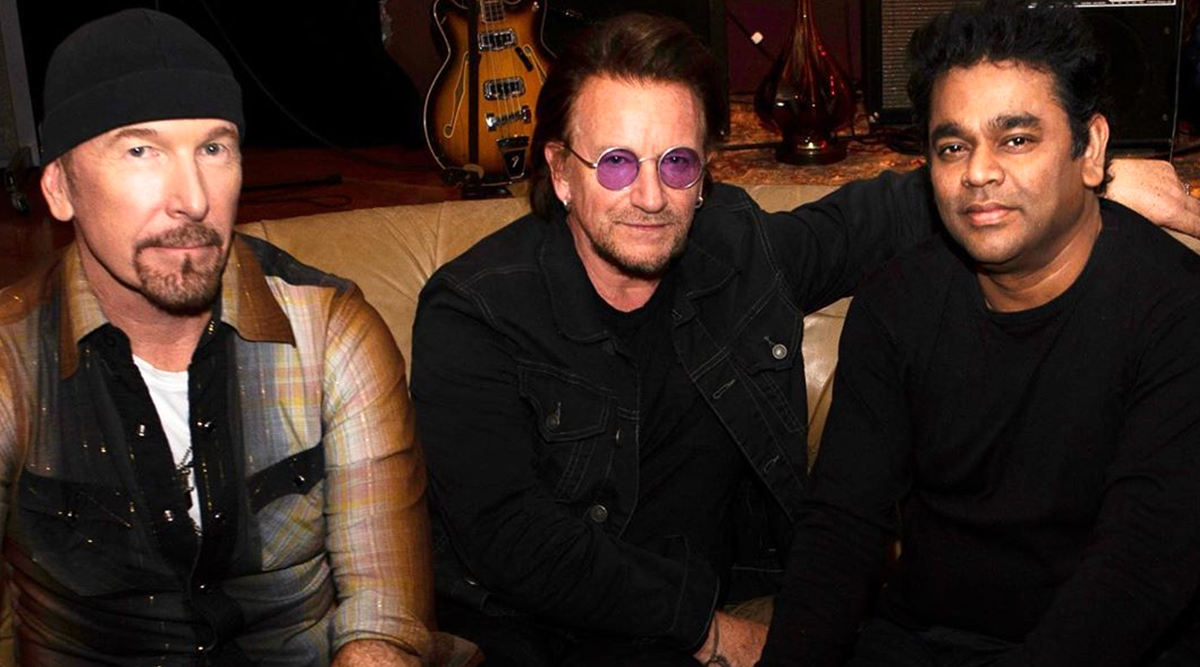 Oscar-winning composer AR Rahman will be opening for U2 when the Irish rock band performs in Mumbai on December 15. Rahman's performance will also feature his two daughters. Rahman will perform "Ahimsa", a collaborative single with the rock band, according to sources. "It will be the first time that Rahman will be performing with his daughters -- Khatija and Raheema -- on stage," added the source. The band is set to bring to Mumbai their acclaimed "U2: The Joshua Tree Tour" tour, celebrating their iconic 1987 album of the same name. The concert, to be held at Mumbai's DY Patil Stadium, will be their first gig in the country. U2, AR Rahman’s ‘Ahimsa’ Song Is a Beautiful Ode to Mahatma Gandhi’s Non-Violence Principle (Watch Video)

The band comprises frontman Bono, guitarist the Edge, bassist Adam Clayton and drummer Larry Mullen Jr. In fact, "Ahimsa" is in sync with Bono's philosophy. "The fight against injustice has always been important to us. We were somewhat shaped and formed by Martin Luther King who was a student of Mahatma Gandhi. Martin Luther King said 'The moral arc of the universe is long but it bends towards justice'. I don't believe that any more. U2, AR Rahman’s ‘Ahimsa’ Song Is a Beautiful Ode to Mahatma Gandhi’s Non-Violence Principle (Watch Video)

"It doesn't bend towards justice, it has to be bent towards justice. We have to be actively involved in our democracy to preserve it and show people how we feel and what we care about. We come as students to the source of inspiration. That is ahimsa, or non-violence. India gave this to us -- the greatest gift to the world. It is more powerful than nuclear energy, the armies, the navies, the British Empire. It is power itself. And it's never been more important," Bono had said about the single in November this year. The band is popular for hits like "With or without you", "I still haven't found what I'm looking for" and "Beautiful day".

Comments
Tags:
AR Rahman DY Patil stadium U2 AR Rahman Song Ahimsa U2 in DY Patil Stadium U2 Mumbai Concert U2: The Joshua Tree Tour"
Comments
You might also like