Dave Bautista is tired of his comparison to contemporaries like John Cena and Dwayne Johnson. 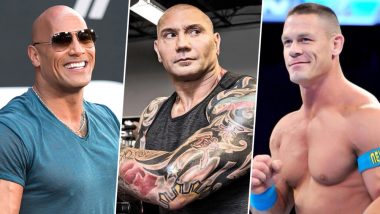 Dave Bautista is tired of his comparison to John Cena and Dwayne Johnson (Photo Credit: Instagram)

Avengers Endgame actor, Dave Bautista, who earlier voiced his anger over firing Guardians of the Galaxy director James Gunn, is back with his recent outrage. However, this time it's a bit subtle and not directed towards Disney who was responsible for Gunn controversy. The actor never learned to mince his words and his brash approach is often praised or criticised depending on his views. After expressing his anger and disgust on Disney's decision, the actor has recently revealed he's sick and tired of the constant comparison of his Hollywood's career with fellow wrestlers, John Cena and Dwayne Johnson aka The Rock. Avengers Endgame Star Dave Bautista Thanks Vin Diesel For Why Drax's 'Invisibility' Scene in Infinity War Works!

In his recent conversation with the Tampa Bay Times, he expressed his displeasure quite loud and clear. He said, "Do not compare me to The Rock or John Cena, everyone does it. Those guys are wrestlers who became movie stars. I’m something else. I was a wrestler. Now, I’m an actor.” He wanted his fans and audiences to note the difference between a star and an actor. While he believes his contemporaries are now big stars in Hollywood, he would always prefer being an actor instead. Avengers Endgame: Dave Bautista Drops a HUGE Spoiler About Guardians of the Galaxy; Wonder What Disney Has to Say About This!

Dave is well known for his role in the Guardians of the Galaxy series along with  Denis Villeneuve's Blade Runner 2049. He'll mark his return in MCU with their next offering, Avengers: Endgame that's slated to release on April 26, 2019. He'll also star in Denis Villeneuve's Dune reboot, alongside a stellar cast including Timothee Chalamet, Rebecca Ferguson, Stellan Skarsgard, Javier Bardem and Oscar Isaac.

(The above story first appeared on LatestLY on Feb 28, 2019 11:23 AM IST. For more news and updates on politics, world, sports, entertainment and lifestyle, log on to our website latestly.com).