BTS Suga Birthday: Did You Know The Rapper Created His BT21 Character On His Dog Holly?

All BT21 characters are created based on the sketches submitted by BTS members. That includes RJ (Jin), Chimmy (Jimin), Cooky (Jungkook), Mang (J-Hope), Tata (V), and Koya (RM). Suga's character is called Spooky and is inspired by the rapper's dog Holly 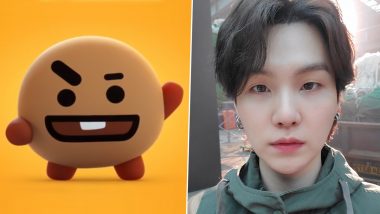 For BTS fans, the birthdays of the band members is yet another reason to celebrate them. ARMY is crazy about them and their albums. The love has transcended borders and made music-lover unite to celebrate their idols. BTS' rise on the charts is just unprecedented. They are everywhere; be it the Billboard or American chat shows or reunion specials of old shows. Adding to their robust fan following are their BT21 characters. BTS' Suga Becomes the First Korean Soloist to Have Surpassed 1 Billion Streams on Spotify!.

BT21 characters are the emojis or cartoons modelled on BTS' members' personalities. The best bit is all these characters are created based on the sketches submitted by the members. That includes RJ (Jin), Chimmy (Jimin), Cooky (Jungkook), Mang (J-Hope), Tata (V), and Koya (RM). They even created a figure for their ARMY called Van. Suga's character is called Spooky which is a cookie. But for emotions, he used the several expressions of his dog Holly. BTS Suga's Spotify Account Gets Hacked! ARMY Notice Bhojpuri Song in Min Yoongi's Playlist.

Here's Suga explaining his artwork to his band members:

Eventually, the company bankrolling the characters for an chat application reformed his design in the shape of a cookie and Suga named it Shooky. As per Metro UK, Shooky has a badass attitude and detests milk.

(The above story first appeared on LatestLY on Mar 09, 2022 09:10 AM IST. For more news and updates on politics, world, sports, entertainment and lifestyle, log on to our website latestly.com).