Captain Marvel Movie Review: Brie Larson's Superhero Outing is Impressive and the Future of MCU Seems to be in Good Hands 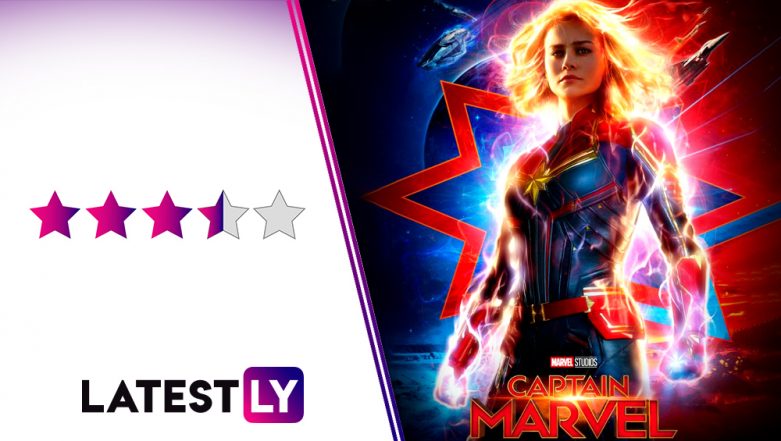 Brie Larson’s Captain Marvel was probably one of the most anticipated movies of all time by Marvel. Well, I say ‘one of the most’ since Avengers: Infinity War and Endgame still hold the top spot. While DC has Wonder Woman, it was essential for Marvel to introduce a female superhero that’s more than a Russian spy or an alien from the space. Of course, Scarlett Johansson as Black Widow is smashing but she wasn’t a real superhero, with all the extra superpowers and some alien technology running in her blood, right?  Brie Larson’s Captain Marvel had to come in the picture and the timing couldn’t have been apter. She’s probably the strongest superhero in the entire MCU, capable of beating the s**t out of Thanos (Yay) and her presence definitely adds some more glamour and intrigue to this otherwise male-dominated universe (it’s not a feminist view but a mere observation). Did You Know Brie Larson Trained For Nine Months Before Taking Up The Role Of Captain Marvel?

The movie as we all know revolves around Carol Danvers, an air force pilot who gets caught in an explosion that’s destined to change her life forever. The same explosion gives her new superpowers, courtesy the merging of her DNA with that of the tesseract (yup, spoiler alert). Now how she becomes a part of Starforce and ends up on Earth or how she saves our planet from an intergalactic invasion is what forms the crux of the story. It’s a usual superhero story where an entire civilization is on the verge of doomsday and the hero (heroine in this case) comes in the picture to stop it from turning into ashes.

There are tons of brilliant scenes in Captain Marvel and most of them revolve around the protagonist and Nick Fury (Samuel Jackson). While superhero movies have no novelty to offer when it comes to its storyline (It’s usually A trying to save B from a deadly attack by C), it’s the execution that does marvel (pun intended). Anna Boden and Ryan Fleck’s direction is top notch and there are whistle worthy moments that will make you cheer for this supremely talented duo. Also, the makers have tried to establish content and worked on its execution like the Thor or Infinity War movie. The film revolves around Danver’s equation with her saviours in the space and her friends and fellow beings on Earth. It tries to present the best of both the worlds and the change in setting seems uniform and very smooth.

Captain Marvel relies heavily on Brie’s screen presence and trust me, she’s a delight for any director and viewer alike. Her strong yet level-headed character provides the sufficient charm to tantalize you and she delves deeper into her character with each scene. She had a great yet scary opportunity to justify and pull off an entire movie on her able shoulders and we are glad for she was able to pass the litmus test with flying colours. Cinematography by Ben Davis is incredible and its background score deserves some brownie points. Captain Marvel: The Brie Larson Film Gets 'Momager' Kris Jenner and Lisa Rinna Team Up For a Hilarious Marvel Ad (Watch Video).

Captain Marvel as a character is equal parts robust and rollicking. There are times when she kicks some ass real hard and then there are scenes where she is boisterous, providing us with the necessary humour quotient that Marvel movies are usually loaded with and known for. With some fierce action scenes, you can’t help but continue to root for Danvers and her badass attitude. She underwent a tremendous amount of physical training for the role and it’s evident in fight sequences throughout the movie. There are certain scenes that’ll give you goosebumps or compel you to cheer from the top of your voice and I mean every word of it. The ones who weren’t really impressed with the movie’s trailer, should go in with a clean slate and let Larson take the charge of painting a beautiful picture. Trust us, you won’t repent it, and join us in believing it to be a classic case of a badly edited trailer.

Carol's character is layered. Her struggles with gender disparity are unending and her efforts to right the wrongs is not an easy affair. She has to distinguish between reality and facade to discern her real enemy. She's a lost soul who's not really determined to find her real identity. But she's destined to be a hero and Brie does a fine job in conveying just the right emotions.

Coming to its cons, the movie has pace issues. Especially the first half feels a bit dragged. There comes a time when your interest is at its peak and you wonder if the movie will only climb ladders from this point.  However, your excitement is short-lived and the pace issues bite you like a snake in the game of snakes and ladder. Just while you are on the edge of your seat, the editor goes for the break and eventually lets your exhilaration take a back seat.

Brie Larson is BRILLIANT as Captain Marvel and there are no two ways about it. For the ones who have seen her in Room would agree that she was a wise choice to play the titular role in this superhero movie. She lights up the screen every time she comes in the frame and her comic timing is commendable. She brings the necessary poise and exuberance required for her character with utmost fervour and is delightful on the big screen. Don’t compare her to Gal Gadot for it would be simply unfair and harsh. Give her a chance to woo your heart and see the result for yourself.

It’s amusing and amazing at the same time to see Nick Fury without his iconic eye patch. His camaraderie with Danvers is one of the major highlights of this film. It’s so relaxing to see him dress in normal and ordinary attires than slaying in black that’s more like his identity now. This version of Fury definitely takes home the trophy for being an entertainer who will tickle your bones with his comic approach. We hope the makers have some way to retain this particular character through certain throwback instances for example.

A special mention to Goose the cat who's a little furball responsible for one, no two of the most iconic scenes in the movie.

Jude Law, however, is wasted throughout. This is one Marvel movie that matches DC when it comes to having a bad villain. Though the actor tries too hard to play the perfect baddie, his efforts fall flat. Blame it on his lesser screen time but Law doesn't come across as a mighty villain who's determined to seek victory against all odds. Captain Marvel: All You Need To Know About the Post-Credit Scenes In the Brie Larson Film.

Captain Marvel deserves your attention and a bit of your money from the wallet right away.  Watch it for Brie Larson and how she justifies this brilliantly written character. The movie is at par with Black Panther and the ones who cheered for Chadwick Boseman should go ahead and give a shout out to this Academy Award-winning actress. She’s here to stay and I can’t wait to go ahead and catch her in Avengers: Endgame that hits the screens on April 26, this year.

P.S. The mid-credit scene is EPIC. Revealing details about it will ruin the fun for you and we wouldn't wish that for our worst enemy. So go ahead and enjoy it.