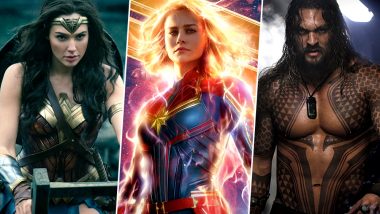 Fans are now counting days until Brie Larson's Captain Marvel hits the theatres. The film is all set for a worldwide release on March 8 but the film's early booking commenced in the US as early as January and has ever since been soaring high. The film has been receiving positive responses from its previews and now we hear that the film has got a strong response for advance tickets. According to reports, the film will turn out to be a huge money spinner given its early tickets sale.

Buzz is that Captain Marvel has surpassed the pre-sale tickets numbers that DC's Wonder Woman had managed to gather. Captain Marvel is preceding the release of Avengers: End Game and there's no doubt that fans are going to look for clues for the Avengers finale in this one. In terms of superhero origin stories, Captain Marvel is second-highest after 2018's Black Panther which until now has the highest advance-ticket sales. What's amazing is that the Brie Larson film has gone beyond DC's Aquaman too. It is amazing considering Aquaman had a positive response in its favour from the start whereas Captain Marvel has been through immense negative buzz. Captain Marvel New Promo Features Iron Man, Captain America, Thor alongside Brie Larson’s Carol Danvers - Watch Video.

Captain Marvel traces the story of Brie Larson as Captain Marvel aka Carol Danvers (her alter ego) who steps into an intergalactic war after realising her powers to save the planet. It also stars Jude Law and Samuel L Jackson as a young Nick Fury, The film is releasing on March 8 worldwide and it is a double whammy of sorts because the film releases over International Women's Day and what's better than a strong feminist superhero icon in theatres.

(The above story first appeared on LatestLY on Feb 22, 2019 11:06 AM IST. For more news and updates on politics, world, sports, entertainment and lifestyle, log on to our website latestly.com).