Singer Celine Dion revisited her iconic song "My heart will go on", and tweaked it to encourage people to practice social distancing amid the ongoing coronavirus pandemic. 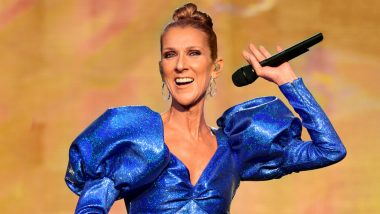 Singer Celine Dion revisited her iconic song "My heart will go on", and tweaked it to encourage people to practice social distancing amid the ongoing coronavirus pandemic. Dion posted a re-do of the lyrics of her 1997 hit on her Instagram feed on Thursday, reports dailymail.co.uk. The 52-year-old French Canadian diva posted a brief video snippet of her music video from the hit, which was the love theme for the Oscar-winning film "Titanic", next to which she wrote the altered lyrics in both English and French. "Near, far wherever you are... make sure you're practicing social distancing," the singer wrote, before repeating the same sentiment in French. Angelina Jolie Is Worried About the Rise in Child Abuse Cases That Might Happen During COVID-19 Quarantine.

She signed off in the caption with "Team Céline" and included the hashtags #ThursdayWisdom #restezchezvous #StayAtHome and #throwbackThursday. Dion's post comes as many celebrities remind fans and followers via their social media channels about the importance of staying home during the spreading pandemic. Earlier in an episode of "Watch What Happens Live", she revealed that initially she didn't even want to do "My heart will go on". "There was one song that I didn't want to record, and I'm glad they didn't listen to me," Dion said in response to a question from a fan on the show. Sandra Bullock Donates 6,000 N95 Masks for LA Healthcare Workers to Combat COVID-19 Pandemic.

Celine Dion Tweaks My Heart Will Go On Lyrics

Near, far wherever you are... make sure you’re practicing social distancing! ⠀ Near, far, wherever you are… assurez-vous de pratiquer la distanciation sociale ! - Team Céline #ThursdayWisdom #restezchezvous  #StayAtHome  #throwbackThursday

It was her late husband Rene Angelil, who was her manager at the time, who convinced her otherwise. "It didn't appeal to me. I was probably very tired that day -- very tired," Dion confessed, adding: "My husband said, ‘Let's hold on'. He talked to the writer and he said, 'Let's try to make it, like, a little demo'." The song went on to win the Oscar for Best Original Song, as well as two Grammys for the superstar.

(The above story first appeared on LatestLY on Apr 10, 2020 04:35 PM IST. For more news and updates on politics, world, sports, entertainment and lifestyle, log on to our website latestly.com).