Channing Tatum Birthday: Step Up And Other Best Movies of the Actor That You Should Definitely Watch

Today as Tatum gets ready to celebrate his big birthday, we take a look at some of the best roles in his acting career so far. 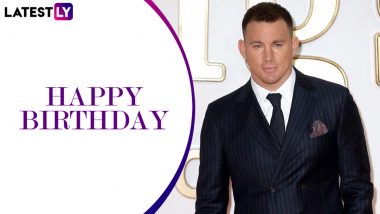 Gear up ladies for Channing Tatum celebrates his birthday today (April 26). The handsome hunk of Hollywood who often makes us go weak in our knees is also a charming actor with some impeccable movies under his belt. While we personally love him in action movies, we can't stop thinking of him in his romantic roles either. We personally think, he has the perfect jawline and a body that's worth drooling over. But that's not what we are discussing here. The Lost City Of D: Patti Harrison Boards Sandra Bullock, Channing Tatum's Romantic Adventure at Paramount.

Today as Tatum gets ready to celebrate his big birthday, we take a look at some of the best roles in his acting career so far. Yes, that includes White House Down. We simply love him in it. For the rest of the list, keep scrolling below...

If you are mentioning Channing Tatum's best movies in Hollywood, Step Up has to find a place. The movie that's still praised by the masses revolves around Tatum's character who dances to win a competition so that he's able to save his home. The film was an instant hit with the masses and performed incredibly well at the box office. Many Step Up fans felt the movie won't be the same anymore post, Jenna Dewan, and Tatum's divorce in 2009.

No, Gerard Butler is not the only one who gets to save the President when the White House is under attack. Channing Tatum had the honour too. This classic action-drama is filled with plenty of action scenes and many believe, this was better than Butler's 'fallen' series. Tatum plays a police officer whose dream is to find a place in the secret service and well, destiny decides to give him a chance to prove his worth.

Channing Tatum suits up as a police officer once again with Jonah Hill in this remake. Due to his bad track record, Tatum and Hill's character are sent to detention to a different unit where they must fight the bad guys. A classic action-comedy with handsome Tatum doing full justice to his character and incredible Hill being his amazing partner. Not Just Karan Johar, Channing Tatum Is Also Releasing a Children's Book.

A drama that starred Channing Tatum and Adam Driver. What happens when someone gets laid off from his job? They either try and search for more options or get frustrated with their life and decide to plan a robbery like in this case. Logan Lucky was an incredible drama loaded with some fine performances that we can't help but keep rooting for.

Long-distance relationships aren't easy and the pain to stay away from your loved one is unbearable. Channing Tatum's Dear John revolves around a similar emotion when a young couple, recently fallen in love have to endure that very pain. As John is sent on war, he and his lover continue writing love letters to each other until a tragedy strikes and shakes them up. A heartwarming movie that's a must-watch for Tatum.

(The above story first appeared on LatestLY on Apr 26, 2021 10:00 AM IST. For more news and updates on politics, world, sports, entertainment and lifestyle, log on to our website latestly.com).